Despite them being one of the greatest foods ever created, it’s hard to review specific popcorn balls.  This is mostly due to them being something of a commodity, where even though many brands make them, they are very similar.  There are exceptions, of course.  You can probably find plenty of “gourmet” popcorns balls, where they texture and taste approaches home-made quality.

But I don’t have time for that.

I want a dozen popcorn balls for $5, and I want to grab them off a store shelf.  I love the hell out of them, but when it comes to putting in effort, I have my limits.

Usually, I have to count on Act II to fulfill my pre-packaged popcorn ball needs.  When I first brought up popcorn balls as an upper echelon Trick or Treat giveaway, Act II was the example given.  However, this year they were alarmingly absent.  Even online, their popcorn ball presence is missing.

A Google search for “Act II Popcorn Balls” results in Act II’s page as the second result.  The first result is a Target page that suggests you buy a children’s ball pit, instead.  And while it’s hard to argue that logic, since that is an awesome thing to own, it’s not very helpful.  The first result that mentions them is an Amazon page that tells you they are unavailable.  What is going on?

I had become worried that my Halloween food pyramid’s recommended two daily servings of popcorn balls would not be reached.

Thankfully, at least two brands have stepped in to fill the void. 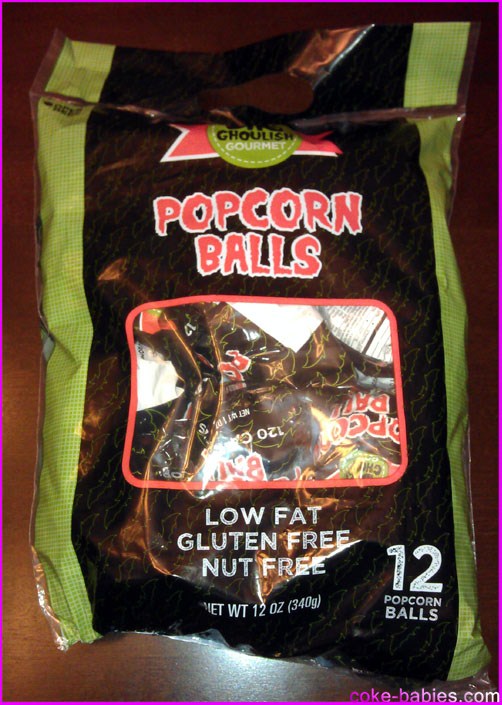 “Ghoulish Gourmet” seems to be one of Walmart’s in-house brands.  Oddly enough, they don’t seem to put anything else under this label, that I could find.  So Walmart gets it.  Popcorn balls are so necessary that if you have to make an entire line, just for one product, that’s what needs to happen.

I like the packaging, because the “Popcorn Balls” logo looks like something I’d do for my site, and think it looks really good.  Despite, of course, it looking like the heading a Cradle of Filth Geocities fan page in 1998. 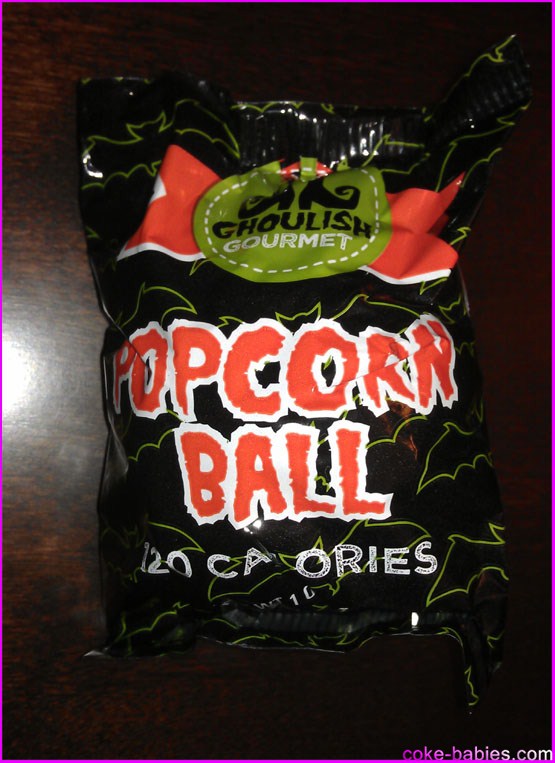 The individual wrapping isn’t much different, but I am beginning to appreciate their efforts to make the orange as bright as possible.  Part of this is due to my atrocious photography skills, where I think it’s a good idea to get really close and leave the flash on.  But for the most part, the orange actually is this bright in real life.

One odd thing about both popcorn balls I got this year, and I think this applies to Act II as well – they’re not actually spherical balls.  From the top, they look like a baseball, but from the sides they look like a fatter football.  I suppose that description wouldn’t be as catchy and would make the label a bit cramped, so “balls” it is.

The Ghoulish Gourmet ball was really good, despite a couple of flaws.  One of those flaws added a bit of enjoyment for me, but the general public might not be as into it.  A few of the kernels were burned, so a couple bites had that burned microwave popcorn flavor.  I actually like a bit of that.

I think that’s due to the fact that while growing up, my dad would microwave popcorn for about seven minutes, resulting in a solid block of charcoal.  He liked it like that for some reason – I guess a tiny bit of that wore off on me.

The other downside was that I got an unpopped kernel in one of the balls.  This is to be expected at the bottom of the bowl when microwaving popcorn.  In the rare instance where I make a bowl of popcorn and don’t have a single unpopped kernel, my level of pride is embarrassingly high.  But when you’re taking a bite and chewing, an unpopped kernel is a very unwelcome surprise.

All in all, Ghoulish Gourmet does the popcorn ball category proud.  It’s got the nice balance of just enough sweet that good popcorn balls have.  I like this aspect, because when I have five of them at once, I can rationalize it with, “Well they’re less sweet than candy!”

The other popcorn ball I found was from a company a lot of people have probably heard of – The Popcorn Company.

Their popcorn balls came individually wrapped, in a decidedly less “Halloween”-y design.  It’s orange, but that’s where they stopped.  This is possibly to hedge their bets, and keep them on the shelves for the rest of Fall.

The label is a little odd.  First, I was a bit alarmed when I saw, “Celebrate… Deliciously!*”  I thought at first it was an asterisk, and was rather upset as to what they might need to clarify in their footnote.  A second look revealed it was actually the registered trademark symbol, so I was able to calm down.

A couple minor issues I have with the packaging – first, it looks like there should be a fourth popcorn with a phrase on it, at the bottom left.  The balance looks all wrong.  Secondly, “Limited Offer!” seems like either a strange way of putting it, or it’s just strange that they feel that’s one of the top three selling points.

Taste-wise, the Popcorn Factory’s ball is really good.  It seems to be a hint sweeter than Ghoulish Gourmet’s, but that seems to actually balance better with the very light saltiness and toasty popcorn flavor.  Of the two, I’d give the edge to Popcorn Factory’s effort.

Both company’s put out very good popcorn balls, and there are probably many others out there that I just didn’t see.  So if you see any – buy them.  Eat them by the dozen, and buy more to give away on Halloween.  We need to return this country to its glory days – when popcorn balls were something you would see in a child’s pumpkin.