Many things go hand in hand with milk: cookies, cereal, coffee, and a multitude of things that don’t begin with “C.”  One thing that doesn’t spring to mind is another “C”: carbonation.  And yet, while shopping in Pathmark, I recently came across a variety of beverages that feature carbonated milk.  Of course, the whole “shopping at Pathmark” thing explains a lot, but not enough.

Carbonated milk isn’t completely unheard of; egg creams are good, as well as drinks made of three parts Sprite and one part milk (it’s really good, try it.)  Even with those being considered, something about the idea of carbonated milk makes me cringe.  Maybe I’m too old for this fad.  Is this popular in grammar school and junior high?  I’ve usually got my finger on the pulse of what’s going on in children’s culture (ignore the fact that that sentence conjures up weird imagery,) but I must admit I am at a loss here.

Although there’s also a good chance it’s not a fad, and is in fact just something gross that’s going on at Pathmark, which would make perfect sense.  That being said, I am proud (?) to present to you e-Moo and RPM carbonated milk beverages.

Despite the fact that the other drinks are named “e-Moo,” RPM somehow manages to have an even more incredible label.  It describes itself as: “A NUTRITIOUS BEVERAGE” for active lifestyles!  The odd placement of quotation marks and the odd usage of capitalization get things started off on the right foot.  The right foot being the one that puts the pedal to the metal, since after all, this is RPM we’re talking about.  Get it?  Ugh.

It declares that it provides calcium, magnesium, and potassium.  I like to think that I am fairly well educated when it comes to health matters (ignore everything I have ever said about what I eat, and that becomes a more believable statement,) but I must admit that I haven’t heard too much about the importance of magnesium.  But they brag about it on the label, so I guess it’s important.

RPM also has some bizarre ingredients, and the ingredients that aren’t bizarre just sound strange.  Among the weirder ones are crystalline fructose (sugar, I assume,) and calcium lactate, which is used to aid mothers and fathers in breast feeding.

While perusing the ingredients, the one that stood out the most was coffee.  Oh well, I guess I’m going to dislike the taste, since I hate all things coffee.  I’ll still try it, but don’t expect glowing reviews.  A carbonated, milky coffee beverage… I can’t wait.

Wait a minute; it lists decaffeinated coffee as the ingredient.  Wait a minute, decaf?  I assume I am not the only one getting the impression that a drink called RPM, and a logo of a speedometer hitting high speeds, would be moderately caffeinated at the very least.

I was concerned about the lack of caffeine until I was completely distracted by bottom of the front of the label.  In bold, capitalized red letters, it just says “MALGAXE.”  What the hell?  I have gone from being unhappy about the impending taste to downright frightened of drinking this.  What the hell is Malgaxe? 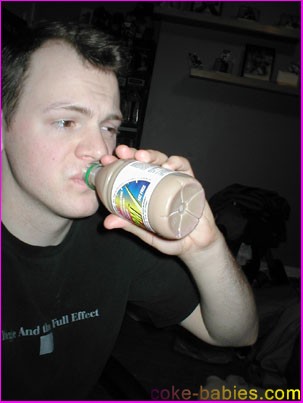 Let’s just get this over with.

And, it tastes pretty much how you’d expect: coffee with milk.  And bubbles.

From the rather mundane coffee taste of RPM, we move onto something that has the potential to be utterly disastrous.  There are many good things about e-Moo, but they’re mostly for the wrong reasons.  The name, the colors, the flavor names… e-Moo’s got it all.

First of all, the name, “e-Moo”?  I don’t get it.  There is absolutely no explanation given as to why it is named that.  Is it the official garishly colored carbonated milk of the information superhighway?  Or is it made of emu milk?  I would think that if that was the case, it would be a lot more expensive. 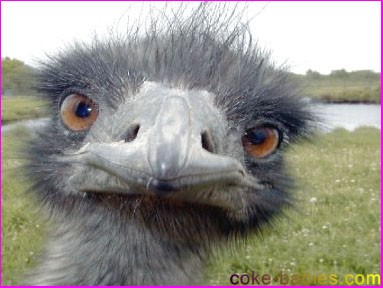 Either way, the lack of explanation just makes the name uncomfortable.

Beyond the name, there is nothing too bizarre about the label, nothing close to the creepiness of RPM’s random capitalization and the “MALGAXE” fiasco.  The names of the flavors are pretty dumb:  Orange Sparkle, Mooberry, and Chocolate Zing.

I decided to try the most frightening looking one first.  That, of course, is the one that is safety-cone-orange colored.  It smelled okay, like a Creamsicle.  It tasted, well, like a Creamsicle.  More precisely, it tasted like a Creamsicle that came from a defective batch, due to the intense amounts of sugar it contained.  Seriously.  Drinking this was like being thrust into the middle of a Mountain Dew commercial.  Intense. 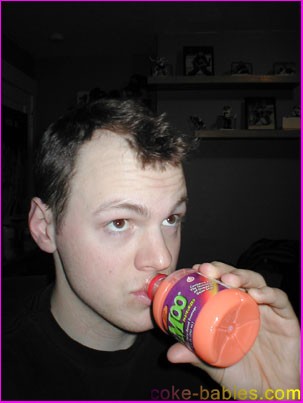 And by intense, I mean unpleasant.  I can’t say it was terrible, it was just horribly sweet.  I also got sick fairly soon after drinking this, and had to postpone the next two flavors until the next night (which is actually now.)  I can’t prove this is because of the Orange Sparkle, but I have my suspicions.

So, after twice the recommended serving of Pepto Bismol and a good night’s rest, I was ready to tackle the final two… or was I?

I decided to save what I assumed would be the best for last, and drank the Mooberry first.  Oddly enough, this would be less disturbing looking if the color was brighter.  Instead, it is a murky purple, like a cherry vanilla ice cream that melted.  Except more purple, I guess.  The best way to describe it is to imagine the least pleasant shade of purple you can think of, and it’s probably pretty close to Mooberry.

I still can’t get used to the idea of opening milk and hearing the telltale “sshhhhccccchglkjdfhl” sound it makes when you open a bottle of soda.  It smelled pretty good actually, like the milk you get after eating a huge bowl of Crunch Berries.  And it wound up tasting very similar to that, as well.  Except much, much sweeter.  And when something is much sweeter than Crunch Berries, that’s saying quite a lot.  Quite a lot of bad things.

So Mooberry would be pretty good if it weren’t for the creepy fizzy texture.  It makes drinking it completely confusing, and in a horrible way.  You can pull off surprising tastes and textures with food; it just has to be done well.  Crunch and Munch is sweet and salty at the same time, and it tastes great.  I can’t actually think of any texture examples, but I shouldn’t have to.  I don’t think I need to bring up evidence to support my claim that bubbly fruit milk is just flat out weird.

Finally, it was time for “Chocolate Zing” E-Moo.  It smelled like the bottom of a bottle of Quik, if you didn’t shake it before drinking.  This appears to be the running trend with e-Moo, spasm inducing sweetness.

It actually smelled a lot sweeter than it actually was.  It actually tasted pretty good, and the carbonation wasn’t that weird.  I guess it’s because the chocolate flavor made it just taste like a chocolate egg cream, so it wasn’t such a shock to the system.  The biggest downside to this flavor is that it contains the ingredient “Carrageenan,” which really doesn’t sound like something I want inside me.

After deciding that the chocolate flavor was good, I realized that the orange and berry flavors are probably just disgusting no matter what, with or without carbonation.

And I guess that’s true in all aspects of life.  If something sucks, no amount of carbonation is going to save it.  I know that might not be the easiest thing to hear at this point in your life, but it is best to hear if from someone you can trust.