Unless there is a gigantic “NEW!” or similar claim, I don’t usually get too emotionally invested in cereal boxes.  Sure, sometimes they are depressing, like when the drawings of Lucky the Lephrachaun get a little too realistic, or when the vibe of a “budget” cereal is just a little too sad.

But other than that, for the most part, whatever you want to throw at me on the front of the box is fine.

I’ve long spoken of Honey Nut Cheerios as a cereal that doesn’t get enough respect, especially from me.  It’s a very good cereal that, for some reason, has an overwhelming aura of boringness to it.  I’ve done a better job of powering through my irrational prejudices against it, and making it part of my regular rotation.  But now, they are really testing my newfound loyalty.

The new Honey Nut Cheerios box is an abomination.

By now, I’m sure you’ve seen the commercials set to Nelly’s “Ride Wit Me”, oh so cleverly re-imagined as “Must Be the Honey”.  It’s the sort of parody song that Weird Al would crank out in a few seconds, should he ever develop an addiction to cocaine that destroyed his existing finances.

You know when you’re talking to someone, and ten minutes after the conversation ends you think of a really funny reply?  And you’re just angry at yourself, knowing the chance has passed and you will never get to use it?  That’s what this should have been.  When the song was relevant, “Must Be the Honey” could have been a moderately clever jingle, for the month or so we would have put up with it.

But thirteen years after the fact?  I’m sorry, General Mills – you’ve got to let that idea fade into the ether.

Small favors, I suppose – they give you some good news on the front of the box – it’s “Limited Edition”.  Not limited enough, unfortunately, that it didn’t reach my supermarket.

Even Buzz Bee’s redesign makes him look like a jerk.  Here he is, on the box of Medley Crunch:

The awfulness continues, and actually grows, on the back of the box.

First, he addresses us as “Home Bees” – bad start.  Regarding his signature, at first I thought it was an amalgamation of a drawing of a bee and his initials, since the wings look like the “B” in “Bee”.  But since his first name is Buzz, and I couldn’t find the first “B”, I think his signature is literally a drawing of himself.

For that, I have to give him credit – that’s awesome.  I’m tempted to just put a little stick figure man on my credit card signature line, and sign all my legal documents that way.  So, fair’s fair and give credit where credit’s due and all that.  Well done, Buzz.

Back to the terribleness.  Although I’m feeling a bit of fatigue from this box, so we’ll wrap this up.

What I don’t get is, why did Buzz Bee decide that he wanted to adopt the persona of Kenny Fisher from “Can’t Hardly Wait”?  Although I can’t decide if Buzz Bee Tweeting “Why ya’ll gotta waste my honey flava? #mustbethehoney #loveburger4eva” would annoy me or make me proud.  I think the latter.

After successfully avoiding using Twitter for however long it’s existed, I had to create an account, if only to tweet this, in response to General Mills’s request that I share my “Must Be the Honey” moments:

Listen, Buzz, or General Mills – whoever reads this – stop this.  Right now.  Honey Nut Cheerios is an awesome cereal.  But it isn’t, and never will be, a cool cereal.  It’s a cereal that people don’t have for a while, then go, “Oh, 2 for $5?  I guess I’ll grab a box.”  Then they enjoy the boxes, and next time they’re at the store, they remember this and buy more.  Then they forget.  Repeat pattern.

Bring back Buzz’s Chucks, clean up his act, make him pull up his pants / fuzzy crotch, and cut this crap out.

Well, then.  This is about as horrendous as a two-flavor combination could get.

Grab some black jelly beans from further down the aisle, and you’ve got the worst day possible all ready to go!

It seems that lots of my cereal reviews start off with an admission akin to, “I don’t usually give (whatever cereal) the credit it deserves.  Then I eat it and am glad I got it.”  So I guess that can be my catch phrase.

I don’t usually give Honeycomb the credit it deserves.  Then I eat it and am glad I got it.

Hmm, not as catchy as I’d hoped.

While confirming the actual spelling of Honeycomb, it became clear that Post isn’t particularly strict about presenting the cereal’s name.  I always thought Honeycomb was one word, but the box indicates it is “Honey-Comb”.  But according to Post’s web site, it is indeed Honeycomb.  So on the box, they broke one of the main rules of professional writing – avoid that dangling hyphen thing.  Oddly enough, “dangling hyphen thing” is the actual term.

What an exciting paragraph that was!

I saw the “Limited Time Only!” and was confused.  Then I noticed the almost subtle “With Twisted Marshmallows” subtitle, and was even more confused.  Why would they add marshmallows to this?  Honeycomb’s cereal pieces are gigantic – they are probably the biggest pieces of any cereal.  So are the marshmallows going to be as big as quarters to keep pace, or are they going to be regular-sized cereal pieces lost amidst the monstrous Honeycomb pieces?

What was also surprising was the box’s design – usually when a cereal comes out with a limited-edition variety, the box design gets a dramatic makeover.  Instead, Honeycomb was chill about it, content to just add a little line at the bottom to let you know what’s up.  There are also marshmallows flying around, but they’re almost camouflaged.

In retrospect, I don’t even remember seeing regular Honeycombs on the shelf – only this.  So is this “limited time only” edition taking the place of Honeycomb completely, albeit temporarily?  It is extremely possible that I just forgot to look closely for the regular version.  I’ll let you in on a little secret – my reviews don’t have the most stringent of guidelines and aren’t the most disciplined.  This might also help explain why this site clearly hasn’t been re-designed since the year 2000.

So the official answer on whether or not the marshmallow version has temporarily replaced the regular version altogether is – “maybe, I don’t know – it’s possible”.

Again, the biggest question for all of this is, “Why?”  Some cereals seem like they don’t need marshmallows, but wind up being pretty solid – Froot Loops, Apple Jacks, and other examples I don’t feel like remembering at this moment.  But Honeycomb?  It makes about as much sense as adding marshmallows to Frosted Mini-Wheats.  But then again, they did get me to buy a box, which I probably wouldn’t have otherwise, so I have no real room to talk.

Pouring the cereal, I was (again) confused – I didn’t see any marshmallows.  Upon closer inspection, I found some of the saddest looking marshmallows you will ever see.  They are about 1/6 the size of the cereal pieces, and colored in this tan and slightly tanner tan color scheme.  They look expired.

When I did my reviews of expired cereals, many of the old marshmallows looked similar to Honeycomb’s marshmallows.  Which, as you may have guessed, is not a compliment.

This is Pokemon cereal from 2000, eaten in the year 2012 – look how much more vibrant and appetizing they look, as compared to these: 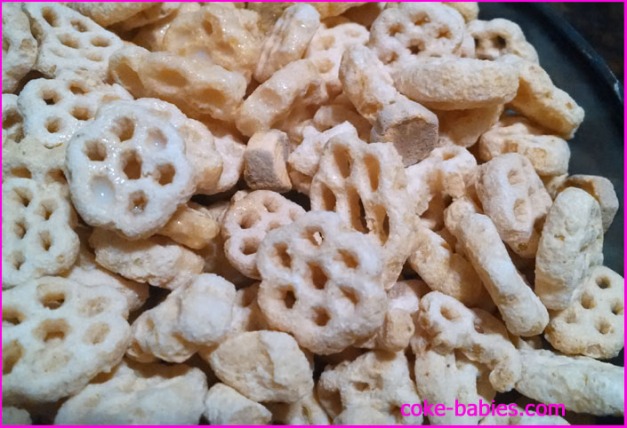 So visually, the cereal is not a home run for Honeycomb.

As for the overall taste and eating experience – it’s like eating a bowl of Honeycomb cereal, except once in a while something feels different while chewing and tastes sort of different, but you’re not sure why.

I’m not saying it isn’t a good cereal – it is.  It’s just a strange and very unnecessary change, especially given how unappealing the marshmallows look.  Speaking again of the marshmallows, that “Twisted Marshmallows” claim on the box is a bit of a sham.  I was initially expecting something shaped like a little Twizzlers Pull ‘N’ Peels.

Instead, we get little hexagons with a swirl on it.  Twisted marshmallows?  More like swirled marshmallows!  I feel sorry for Post after that burn.

So the marshmallows are pointless and rather unappealing to look at, but the gigantic Honeycomb pieces crush the marshmallow sadness, and make for a standard enjoyable Honeycomb experience.

While visually the marshmallows aren’t a home run, the overall cereal-eating experience is “a foul ball that goes into the crowd and hits a little kid in the head and he’s bleeding and crying but the team gives him some autographed memorabilia to make him feel better so in the end it’s a pretty good deal for the kid.”  Or something like that.

[insert “sure, why not?” seal of approval here] 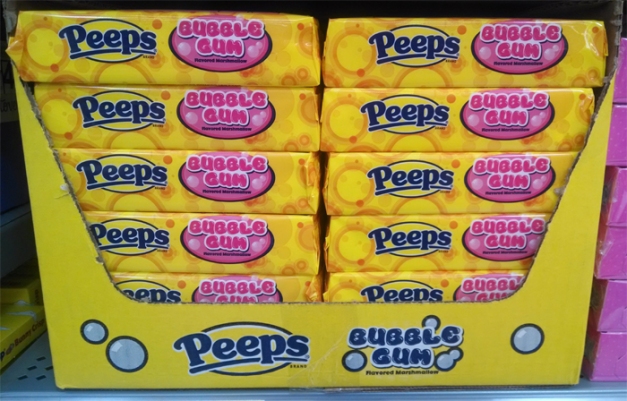 I think now they’re just going out of their way to disgust us.