Despite all evidence to the contrary, I am not consciously striving to turn this site into some bastard spawn of bevnet.com.  It should be understandable that when you spend most of your time sitting down and doing next to nothing, or even during the extremely rare times when you’re actually doing something productive (and by “you” I mean “me”) a beverage is never far from hand.

At the same time, jeez, I really need some new topics.

My latest discovery came as a result of a recent wild house party my friends and I are notorious for.  And by wild, I mean we watch TV and play team Scattergories.  Not that I’m knocking it; board games are bad ass, except when people roll the worst possible letters when it’s your turn to go.

We had gone to Waldbaum’s to get something to drink, but because of Passover and the craziness that goes along with it, the beer selection was sub par.  And by sub par, I mean they didn’t have Tequiza.

Due to this (what I originally thought was an) unfortunate event, we left the store and went to the local beverage distributor.  We would later realize that “distributor” is an industry term for “grossly overpriced.”  They had what we were looking for, but we looked around for a bit.  My goth friend Dersh had picked out a beer called Hobgoblin, because he is into spooky things and creatures of the night and all that.  While that was going on, I had spotted a mildly dusty pack of Chili Beer hiding in the back of one of the refrigerators.

The strangest part about that was that the first few spots in the front of the cooler were empty, as if someone had recently purchased some Chili Beer.  However, the pack I picked up was noticeably dusty (as was much of the selection, come to think of it,) which would indicate that there wasn’t much interest in this variety.  The logical answer is that the employees just couldn’t be bothered to move the old selection forward, since the flavor was not popular.  Although it seems that given the pricing and peculiar selection, logic was something you check at the door when shopping at this distributor.

Amy was still deciding which Starburst flavored drink she wanted, so Dersh and I examined the Chili Beer even further.  The package was eye catching; it had the southwestern color motif, and abstract, square-ish shapes all over the packaging.  Abstract art is big in the southwest, judging by the beer packaging and the old Phoenix Coyotes logo.  And since I gave two examples, that means it’s true.

Stretching almost the entire handle area is the beer’s motto: “Lime is for Wimps.”  Alright.  I don’t really understand why they are so adamant about this; it doesn’t seem like the kind of thing you would construct a manifesto around.  Regardless, it was an issue that they felt strongly about, and weren’t afraid to make their opinion known.

Under their slogan was a picture of a crossed out lime, with NFL written inside it.  We figured out that the N stood for “No” and the L stood for “Lime,” but we couldn’t quite understand what the F stood for.  Oh well.

The first thing that hits you about the chili beer (I’m no longer capitalizing the term) is the smell.  Before you can get it to your lips to take a sip, a strong salsa aroma hits you.  Smelling this, I discovered what I assumed was the inspiration behind chili beer.  What goes together better than beer, tortilla chips and salsa, right?  The beer already has yeast in it (I learned that at Beer School) so we can eliminate the chips, and just combine it with the salsa for the ultimate party drink.

Taking a sip, the thing that shocks you is that your initial reaction is: it’s actually pretty good.  Then that reaction is immediately replaced by a combination of horror, confusion, and revulsion.  The actual taste of the beer is very strong and fairly spicy.  I can handle spicy food very well; I love it.  The level of spice in the beer was just awkward; it was too strong to be a mild aftertaste, and not strong enough to be a decent novelty spicy beer.

And, last but not least, is the absolute worst part of drinking it: the chili pepper.  Every sip you take, the chili lunges at your lips, sending shivers down your spine every time it touches you.  You could have your eyes focused on the chili, bracing for impact; but it would do no  good.  It will still creep you out.  It feels like reenacting an urban legend or some similar Snopes-debunked story where there is a human finger packaged in a bottle, and it is poking you in the mouth with every sip you take.  Horrifying. 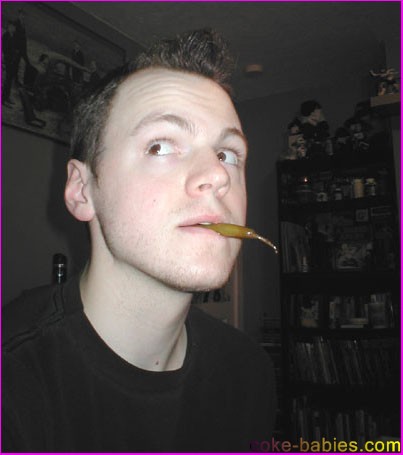 I was ready to stop drinking it about three sips in, but I decided to finish it for God knows why.  After this, I realized that Tequiza is actually really gross and I have no idea why I thought I liked it.