Most people have seen “Reefer Madness,” the hilariously awful film warning the public of the dangers of marijuana.  The script is terrible, the acting is terrible, and the research into what the drug actually does seems to have been made up on the spot.  The drug’s effect on the people in Reefer Madness is comparable to some sort of speedball cocktail of methamphetamines, LSD, and Dexatrim.

The film editing is another wonderful aspect; people jump across the room in what could best be looked at as giving the viewer an idea of what it’s like to be hopped up on goofballs.  Although it is more likely due to frames going missing and the budget was too low to re-shoot the scenes.

I don’t do drugs (marijuana seems too lowbrow and cocaine is too expensive,) but seeing this PSA didn’t really do much to reaffirm my decision to not do them.  The film made doing “reefer” seem like an intense experience; some sort of Yellow Submarine / Grand Theft Auto amalgamation.  Which begs the question, do PSAs actually work?

I’m not actually answering that question.  It was just some drawn out, fairly irrelevant introduction which I will try to segue into the actual subject at hand. 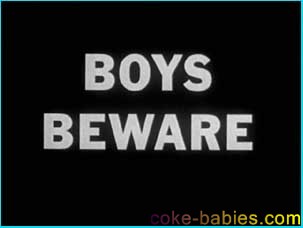 It appears that Inglewood has been having some problems.  With homosexuality.  So much so that they created this PSA to warn the little Toms and Dicks (ha ha) of southern California of this epidemic.  I don’t know where this PSA was shown; I guess in schools, but if it was on TV, I would have watched it..  Although it’s only ten minutes long, so it wouldn’t fill up a full thirty minute time slot, even if it did have commercials.  And who would advertise during this?  I guess they could just loop the PSA a few times, like they do with Ronco or Appliance Direct commercials. 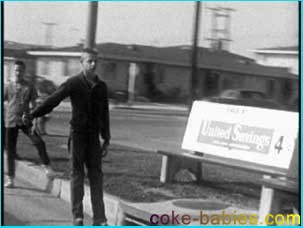 It starts off with a narration by a police officer, who is on his way to a school to talk to some kids.  On the way, he sees a group of teenage boys hitchhiking.  He focuses on one boy in particular, Jimmy Barnes.  Since Jimmy had been playing baseball all day, he didn’t feel like walking home.  He “thumbs a ride” (detective lingo) home with “A Stranger.”  They don’t actually give him a name. 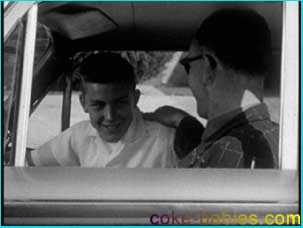 After dropping Jimmy off, The Stranger tells him that he will see him soon, since The Stranger likes to drive by the park often. Gross.  And the next day, there he is, waiting for Jimmy, to give him a ride home.  On the way home, The Stranger buys Jimmy a Coke, and tells several “off color” jokes. 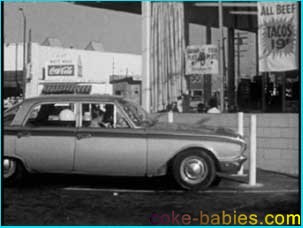 That weekend they go fishing, and The Stranger is given a name: Clint Howard.  I mean “Ralph.” 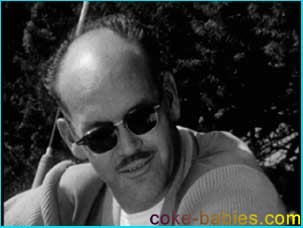 They say that Ralph is sick, with a sickness that “isn’t visible like smallpox.”  I guess that comment puts a slight dent in the modern relevancy of this film.  You see, the sickness that Ralph has is that he has a mustache.

Oh wait, the narrator said “isn’t visible.”  In that case, he is referring to Ralph being a homosexual.  This announcement segues into the two of them going into what looks like a motel, although nothing is actually mentioned about it.  However, in the next scene, it is revealed that Jimmy is now on probation and Ralph is in jail.  At least now Ralph can get help for his sickness.  50’s help.  So it’s safe to assume that Ralph got lots of shock therapy and the occasional lobotomy in order to help treat his infectious, invisible disease. 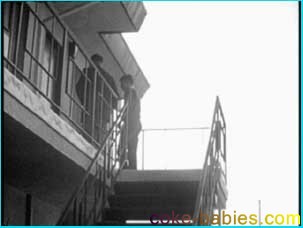 According to the detective, little Jimmy got off easy.   No pun intended.  Jimmy was lucky because not all homosexuals are passive, some resort to violence.  We are then introduced to Mike, who is playing basketball with his friends in the park.  Watching them from a nearby bench is a man dressed in a suit.  If there is one common theme among homosexuals from the 50’s to the 00’s (is that what we’re calling this decade?) it is their keen fashion sense. 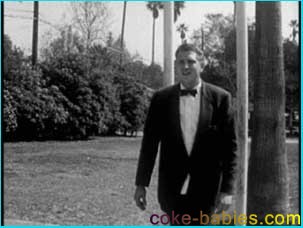 Oh wait; he’s wearing a bow tie.  That should have tipped Mike off to the fact that treachery was afoot.  Ignoring that telltale sign, Mike shoots some hoops with the stranger after his friends leave.  One interesting thing is that the stranger kicks Mike’s ass at basketball.  Mike is absolutely terrible; meanwhile the stranger is heating up.  Wait, now he’s on fire.

Look at this kid shoot a basketball.  Whether or not a stranger tried to seduce him, this kid was definitely predestined for limp wrested territory.  Nice necklace. 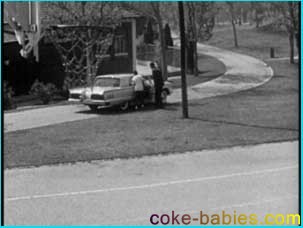 Since their basketball game ran late, the stranger offered to give Mike a ride home.  Mike accepts and is promptly murdered.

“He traded his life for a newspaper headline.”  How poetic.  And what a great transition into the next scene where we see two boys… folding newspapers.  Brilliant! 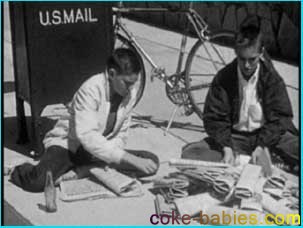 Denny and Jerry are setting up newspapers for Jerry’s paper route, when two bicycles race by them.  There were people on the bicycles though; the bikes didn’t actually race by the kids on their own.  Right after the bikes, a car pulls up and the driver asks the boys if they could recognize the bikes if they saw them again.  The driver tells Denny to get in, because the bikes were stolen. 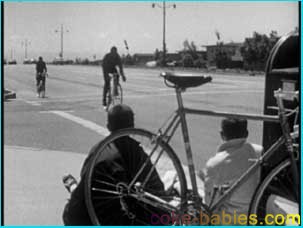 Wait a minute!  That guy is wearing a suit with a bow tie!  But it’s a different car.  So the homosexuals tend to follow the same uniform guidelines, but don’t have to drive in the same type of car.  Although both cars did have fins.  Hmmm… 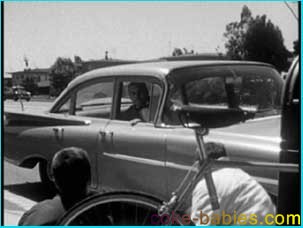 Apparently, Jerry had been told many times that if a friend gets in a car, to write down the car’s license plate number.  Seems like a good idea, although I prefer the method of saying the number repeatedly, then eventually feeling unsure as to whether or not the number I’m repeating is correct, getting frustrated, and giving up. 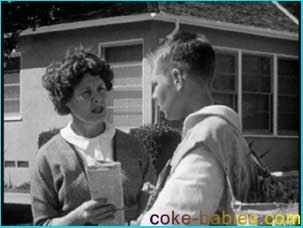 When Jerry delivers the paper to Denny’s house, he discusses the bicycle story with Denny’s hideous mother.  She knows nothing of this story, but seems concerned when the topic of bow ties comes up.  Jerry gives her the paper with the license number on it, in a sleazy attempt to cockblock Denny.

Policemen pull the car over, and the driver gets out and puts his hands on the hood.  However, no one gets out of the passenger side.  Which means Denny is either in a shallow grave with Mike, or wearing a loincloth and using a skimmer to remove leaves from the stranger’s pool.

Finally, we discuss one of the more exciting areas of everyday life: public restrooms.  Bobby doesn’t want to take the long way home with his friends, so he leaves the group to take the shortcut under the pier.  “Under the pier” sounds like it could be used as some sort of slang term for a gay person.

“Bobby is so dreamy, how come I never see him about town with any gal pals?” 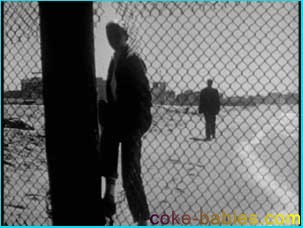 Anyway, when Bobby is about to go under the pier (wink) he notices a man following him, a man he had seen in the bathroom earlier.  He then wimps out on taking the cool kid shortcut, and goes to meet up with his loser friends taking the long way home.  The music that plays when the man is following him is great, it sounds like The Imperial March.

The detective concludes that you should beware of anyone that acts overly friendly, or tries to win your confidence too soon.  This will result in filtering out a wide variety of groups including the homosexuals, door to door salesmen, Jehovah’s Witnesses, telemarketers, Girl Scouts, and other undesirables.

Now if you will excuse me, I need to stop by the dry cleaners to pick up my bow tie.