If you have been inside a supermarket within the past few weeks, you may have noticed the same startling discovery that I have.  There are no more Christmas cereals.  This is strange, for a variety of reasons.

First, cereals usually keep up with holidays.  Well, Halloween at least.  But Halloween and Christmas are the two biggest holidays when it comes to making all sorts of themed crap.  Candy, cereal, Ziploc bags, as well as approximately 11,000 other things get a packaging makeover during these two holiday seasons.  The third biggest season, Easter, probably comes close to Halloween when it comes to sales, what with the candy and Paas egg dyes and all.  However, society hasn’t found a way to completely secularize Easter, which is why it won’t be able to overtake Halloween for overall sales.  I think that’s the top three, unless I’m forgetting one.

During the Halloween season, there were many cereals that were redesigned, be it in recipe, packaging, or both.  Cocoa Krispies, Lucky Charms, and of course the monster cereals become a ubiquitous force during Halloween.

And yet here it is, Christmas season, and there are no Christmas cereals to be found.  There aren’t even “holiday” cereals.  There are Winter Lucky Charms, but that’s nonsense.  That’s two degrees of separation from Christmas, which is too far to be considered.

Christmas Crunch, the re-colored Crunch Berry cereal, is gone.  I don’t know if it was around last year, either.  I don’t think I ever actually bought it.  I know that I can’t personally be blamed for its disappearance, since there are thousands of people who will buy things like that, so Quaker Oats wasn’t missing my $3.79.  I bought a few Snapples, it evened out.  And Christmas Crunch was hardcore.  It wasn’t “Holiday” Crunch, just no holds barred “Christmas.”

I would include a picture of Christmas Crunch, but I haven’t found one by the third page of Google images, so I gave up.

I also know that Super Golden Crisp used to get redesigned for Christmas.  Sugar Bear used to have a Santa hat on.  It also came with an ornament of Santa Sugar Bear, which is hanging on my tree right now. 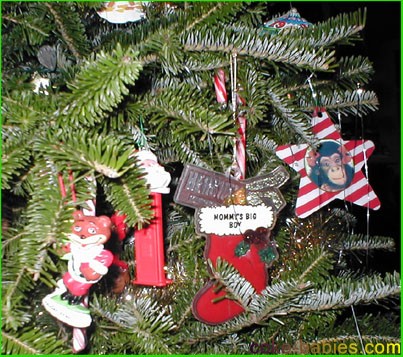 That part of the tree is so awesome.  I don’t know what’s up with the “Mommy’s Big Boy” ornament, though.  That’s kind of disturbing.

And, the most conspicuous of the missing cereals, is Fruity Pebbles.  They had the Christmas commercial.  “Season’s greetings in our souls, yummy Fruity Pebbles in our bowls.  Ho ho ho, I’m h-h-hungry…”  That one.  I haven’t seen that one for a while, either.

I do realize, in retrospect, that that commercial had some screwy morals.  Barney dresses up like Santa in order to steal Fred’s Fruity Pebbles, Barney gets caught, Fred gets pressured by Santa into giving Barney some Fruity Pebbles, and they all partake in some Christmas cheer.  So, basically, this teaches Barney that it is alright to attempt thievery of your supposed best friend; even Santa is fine with this.  What will happen next time Barney attempts this?  Barney will sneak into Fred’s house to steal some Fruity Pebbles, Fred will mistake Barney for a malicious intruder, and shoot him dead.  All of this will happen because of Santa’s reinforcing of poor misguided Barney.

And what was the deal with Fred and his Fruity Pebbles?  Did he manufacture them himself?  If that was the case, I could understand Barney’s need to steal them; that’s the only way to get them.  Although Fruity Pebbles are not something I would exert much effort to obtain, but whatever he’s into, I guess.  I am assuming that Fred bought the Pebbles though, since a box of them and a box of Cocoa Pebbles always appeared on the table at the end of the commercial.  So unless Fred has the ability to manufacture both a processed cereal and packaging, I have to assume he bought the cereal at the Bedrock market.

If Fred did buy the cereal, why couldn’t Barney do the same?  Was he poor?  He had a baby, he could get WIC checks and get cereal that way, although he would only be able to get Cheerios and Life and such.  Oh well, looks like it will continue to be a life of crime for him.

As I was originally saying, I think, it is surprising to go from the once glorious cereal-Christmas relationship to the shameful, long distance relationship they now have.  And speaking of shameful… 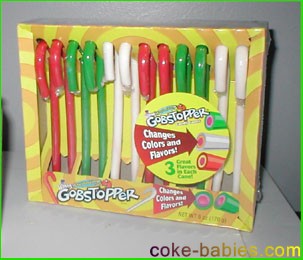 Evidently, Willy Wonka has jumped on the holiday bandwagon, and is whoring out his noble Gobstopper for a few pieces of Christmas silver.  This wasn’t my initial reaction, mind you; this is how I feel after sampling the product in question.  And what product is that?  Why, Gobstopper candy canes.

Somehow, these manage to get everything wrong.  Fruit candy canes just don’t seem to work.  It also is missing everything that makes a Gobstopper so good: the rough, grainy texture of the first layer, and the awesome core.  The candy cane has none of this. 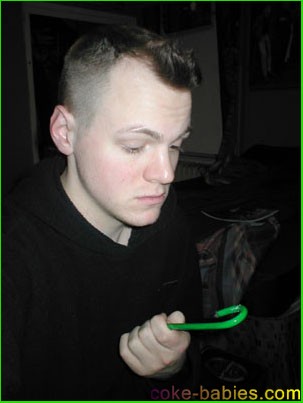 The coloring is also odd.  I know red and green are the official Christmas colors and white is in a candy cane as well, but the way the candy canes are arranged look dumb.  Instead of being striped, they are solid colors.  This leads to them simply looking unappealing.  And, when placed next to each other, they look like the Mexican flag.  Or the Italian one.  It depends which order they are in.

Bottom line:  big thumbs down to Gobstopper candy canes.  Shame on you, Wonka.

And, in keeping with the tradition that every time the concept of Christmas is mentioned, other holidays must be mentioned as well, here is a short feature on Hanukkah.  Unfortunately, I decided to do this after Hanukkah was actually over, so the selection of merchandise was somewhat limited. 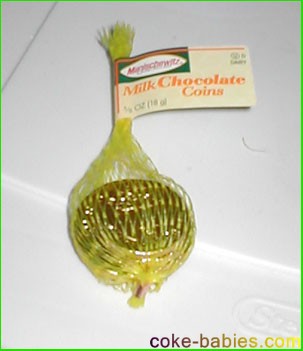 Luckily, I was able to snag this sweet bag of Manischewitz Chocolate Coins.  I think, except for Matzo crackers (which are delicious,) this is the first Manischewitz product I have ever purchased not for novelty purposes.

I assume that the chocolate coin thing is some sort of traditional symbol or something, although I honestly don’t know; although if it was, I would expect more of a Jewish theme to the coins.  Instead, they are replicas of US quarters and half dollars.  This provided me with an opportunity to make a tasteless visual joke, with Kennedy’s chocolate brains coming out of the back of his head, but the lighting just wasn’t right.

The coins come in a cool little bag, the kind oranges usually come in.  The wrappers don’t skimp on the shine, either.  The chocolate is just plain milk chocolate; not great, but not bad at all.  Overall, chocolate coins get a big thumbs up.

Here is my impersonation of the principal from “Welcome Freshman” when he finds the quarter in the pay phone at the beginning of the show.  However, instead of biting into metal, I am biting into foil and chocolate.  So I sort of win.

Man, what a stupid Christmas article.