Some things, people take much more personally than they have any need or right to.  This irrational behavior is often more prevalent in males than females, although I’m basically making that up and it’s very possible that it isn’t true.

This happens in all aspects of society; be it a favorite sports team, restaurant, shoe… whatever.  There will always be one idiot defending something to the death, despite the fact that it doesn’t affect their lives in any way.

I can’t lie; I am that way with certain things.  I have a few favorite sports teams, but if you don’t like them, or even make fun of them, I won’t particularly care.  With music, I’m basically the same way.  You can dislike or make fun of almost anything I listen to, but there are a few certain bands or artists that if you make fun of, I will stab you with a pen.

Today’s subject doesn’t fit this mold exactly, but is something I hold very dear to me, like an old stuffed animal or a clump of a friend’s skin.  It has been a very important part of my life for a long time now.  I am, of course, referring to Pepsi One.

Having a favorite soda is one thing, but taking a soda and its changes personally is stupid, right?  Wrong, dickhead.  This isn’t in the same classification as regular or diet Pepsis or Cokes or Rites or RCs or whatever.  Pepsi One is special.

Pepsi One belongs essentially to me, and I give permission for certain appreciative parties, such as Adam and my brother, to drink it.  Other than that, no.  Leave it alone.  You don’t appreciate it; you are the reason Waldbaum’s barely stocks it, because it isn’t properly loved.

Given my long standing love affair with Pepsi One, you can understand my shock when I opened a magazine last month, and discovered their new ad campaign.  The ad was almost entirely white.  White?  Pepsi One is silver; that isn’t open to debate.  It’s the Coors Light of soda, except for the fact that it isn’t completely disgusting.  So judging by the ad, I figured the new can would be white, which would just be awkward.

Also, the biggest change was in the soda’s recipe itself.  It would no longer be sweetened with aspartame; it now had Splenda as the sweetener.  Uh oh.  I actually like Splenda, and products with it, but I feared for the recipe change.  Would it be good, or disastrous?  I didn’t see how it could be much better, so I assumed that the only thing that could happen would be for the taste to go downhill.

I then began seeing ads for the new release everywhere.  Bus stops, more magazines, TV, web ads… everywhere.  It made me sad.  It’s like if one of your favorite bands signs with a major label, and suddenly everyone likes them and they’re being played in TGI Friday’s.

And the worst part about this was that I couldn’t even find the new Pepsi One.  I had nothing to do one night (surprising, I know) so I went around town looking for it.  No luck.  I had heard from people online that they had bought it in surrounding states, even the city, but no luck on the Island.

I tried looking online, but the Pepsi One site was useless.  Useless and annoying.  I went to the site, and it was taking a while to load, so I tabbed over to another window I was using.  The Pepsi One site loaded, and started making loud bleeping noises accompanied by music.  I had my volume really loud because I was watching an episode of Beavis and Butthead, and the file’s volume was set really low.  Needless to say, the site’s noises scared the crap at out me.  Then the site’s lack of useful content angered me.  There was trouble in paradise brewing between Pepsi One and myself. 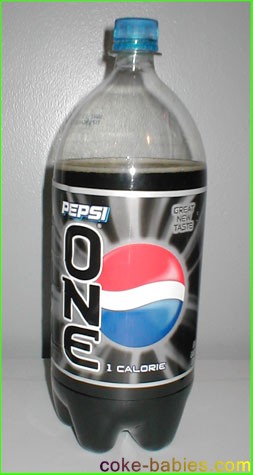 Tonight, I was finally able to try the new product, since my brother brought a bottle home from the supermarket.  The bottle part made me somewhat unhappy, since the canned version of One is way better; the bottled version is too foamy, especially the 20 oz. version.  I immediately opened the soda, poured a glass, and waited for the head to die down.  Or does head only apply to beer?  In either case, I waited for the foam to die down, and drank it.

And didn’t taste anything.  Hm.

This was strange, I drank the whole cup, even had my brother try it, and nothing.  No taste.  On the second cup, I began to taste something, but was still confused as to why there was so little taste.  After the third cup, it was fine; I could taste it.  And what I tasted wasn’t a good sign.  It’s still good, but the original recipe is MUCH better.  The black tastes like the diet version of silver.

This means I will have to embark on the inevitable quest to stock up on as much of the original silver version that I can.  I’m hoping that the canned version of black is better, but I don’t know.

I still give Pepsi One credit; it is the caffeine dark horse of colas.  It has more caffeine than any Coke, Pepsi, or diet version thereof.  At 55 mg a can, it is no joke.  And now with its thug bottle design, it will be more likely to be taken seriously.  I can’t give the new recipe a thumbs down or up, more like a sideways thumb.