I had a shocking occurrence during one of my recent Saturday night parties, which consisted mainly of watching TV episodes on my computer, eating Cup Noodles, and talking on AIM (it gets pretty crazy).  To preface this story, I should mention that despite the fact that when trying to write a concise paragraph I babble on seemingly without end, and despite the fact that my writing has one of the highest commas per sentence ratios on the internet, I don’t go out of my way to hassle people by writing to them.

This also has to do with the fact that I am lazy when it comes to writing.  I have ideas for this site, but they only come to fruition approximately once every change of the Zodiac sign.  I always get mad when I read stupid people’s reviews on Amazon, yet I myself have only contributed one review, where I praise Teaberry gum for its delicious Pepto Bismol-esque flavor.

Hey look at that, I’m actually about to get into the topic at hand with only two paragraphs of unnecessary back story.

While watching deleted scenes from The Office DVDs , I noticed the familiar Cup Noodles in their vending machine.  Cup Noodles appearing on The Office wasn’t surprising; the show has referenced it multiple times.  However something about the package just seemed… off.  Usually when I watch TV episodes on the computer, they are in AVI or MPEG format, since watching DVDs on the computer tends to skip occasionally.

I just realized that is probably the dullest thing I have ever said on here.  The only other option I can think of that would be less interesting would be if you went to your browser’s view menu, and decided to just read the html.  That might prove to be more interesting, I don’t actually know.  The only html I can ever remember by heart is the code to paste pictures in responses on various message boards.  Learning this was merely a survival necessity, since I have no idea how to properly convey my emotions if it doesn’t involve animated gifs.

I don’t know if it was the high definition clarity of the DVD, or just serendipitous luck to have noticed it, but I could see that something strange was afoot.  The package in the vending machine was Cup Noodles, but as you can see, the cup itself looks rather peculiar.  I knew it wasn’t a Cup Noodles cup, and almost immediately I knew what was going on. 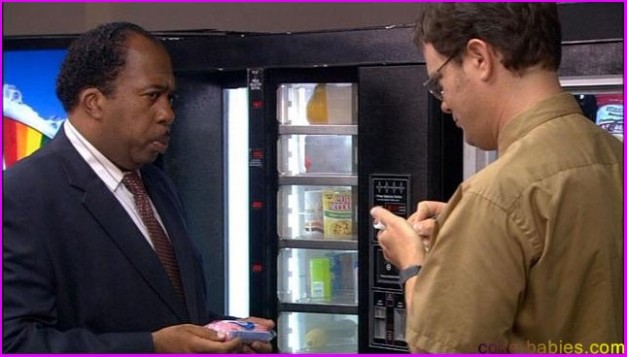 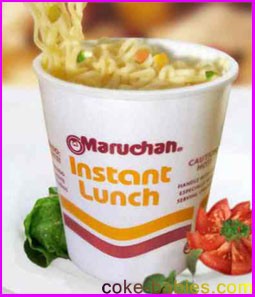 Now, I don’t want to slag off Maruchan; it’s not their fault they are monumentally inferior to Cup Noodles.  However, that point must be addressed in order to understand just what an affront to decency and good taste (double entendre) this whole situation is.  Some of you might be snobbish enough to believe that there is no real difference between ramen noodles.  For some reason, people often assume that if an entire meal costs 22 cents, that it doesn’t warrant comparison amongst its leading brands.  While I disagree with you and will defend my position to the death, I will appease you and do a comparison of a classier type of food.

The difference between Cup Noodles and Maruchan is roughly the equivalent to the difference between Coke Zero and store brand diet cola.  One is a delightful taste sensation, while the other is tolerable provided there are no other options including the water left over when you buy pre-cut watermelon pieces.

I could not let this Maruchan masquerade pass me by without doing something.  I was going to go straight to the top: the “Contact Us” page on the Cup Noodles site.  My impassioned plea to Nissin was done out of the goodness of my heart, to make them aware.  What if an extra on the set was changing out the props in the vending machine, and decided to eat the Cup Noodles?  They would wind up eating the Maruchan within and think lowly of Cup Noodles, since they didn’t know about the age old classic ramen switcheroo.

What follows is my informing Nissin of what was going on, while they sat there unaware of the horrible things that people were doing with their packages.

Cup Noodles has come up during scenes of The Office before, in fact the main character Michael Scott had nothing but high praise for it. However, in one scene, you notice the Cup Noodles in the background, in the vending machine. This seems quite normal, “Oh look, a typical office vending machine ready to dispense a soon to be enjoyed Cup Noodles.” However, something caught my eye, and upon investigation proved to be rather unsettling.

I have taken a screenshot of the scene in question:
(web address for picture)

Since you are the professionals, you may notice the problem immediately as well. If not, here it is, ZOOMED IN:
(web address for other picture)

Inside the Cup Noodles cardboard label, they are smuggling in a container of the FAR inferior Maruchan Instant Lunch!!!!!! Is that legal?

Despite this, I will still watch The Office. However, I will stand strong, despite this outrage. I will continue to buy Cup Noodles all the time (unfortunately, my store only carries the ‘standard’ assortment, and I am never able to purchase Salsa Picante Chicken or Spicy Chile Chicken). Oh well :'(

I did not receive a response for a while.  I thought that they were ignoring me, or maybe just didn’t believe this was a serious issue.  When they did respond, I found out the delay was due to them getting the wheels of justice in motion.  They took my comments to the very top.  Well, the top of the department I guess, which isn’t as impressive as the verytop, but at least it’s the top of something.

The response I received is as follows.

Unfortunately, Nissin was unable to file a cease and desist order against Maruchan or NBC, but they know how to look for the silver lining.  Maruchan may be slipping their cups into the Cup Noodle sleeves, but Cup Noodles is the one getting all the face time.  Nissin understands that only isolated psychos like myself will notice that what hides within is not Cup Noodles, so the end result is Cup Noodles getting nonstop prime time exposure.  I have recently contacted NBC about this matter, but have not heard anything back yet.  I am extraordinarily doubtful that they will respond, but if they do I will keep you updated.

And, to be polite, I replied to Monica:

Excellent point about having your label showing, although imagine that happened if you bought the imposter cup?  I’d be ENRAGED!  We don’t have Cup Noodles or even the lowly Maruchan at my job, we have Easy Mac in the vending machines.  That’s even worse.  I don’t want to trick you into bad mouthing another company’s product, but Easy Mac is a sad state of affairs.

And yes, on another episode Jim and Pam buy Kevin 69 boxes of Cup Noodles since they are his favorite.  Also, in a deleted scene on the DVDs, Michael points out the giant Cup in Times Square.  It seems The Office loves Cup Noodles almost as much as I do!

Thank you for taking the time to address my concerns, and for making awesome products.

The end result is that nothing was really settled as far as this situation goes.  Nissin and I were able to share a hearty laugh at Maruchan’s expense, but that is it as far as defending its TV honor goes.

More importantly, as far as the me getting free stuff situation goes, that was a blinding success.  I had this article 95% written, and it was waiting for me to finish it when I got home tonight.  I would have been perfectly fine with blowing the lid off this fiasco, and more than fine with the Nissin thanks.  Yet when I came home, what do I see lying on the table?  An envelope addressed to me, with the lovely little Nissin logo in the “from” corner.

Inside was the typical form letter thanking me for contacting them.  That’s okay, I guess; I wasn’t too impressed since the email I got was actually personalized.  What accompanied the letter, however, was the real prize: 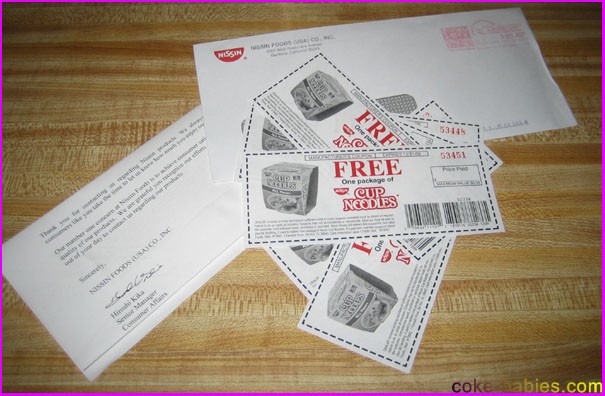 Five coupons good for one free Cup Noodles.  Granted, this adds up to less than $3 worth of a reward, but in this case we are talking about quantity and quality.  And considering that today is Halloween, and that many kids are getting McDonald’s gift certificates right now, I certainly feel that I got the real treat.

There is an important lesson to be learned from this: Never take your Cup Noodles at face value.  And when you think about it, that philosophy works well for all aspects of life.  Although it works best for Cup Noodles.