I’m always have impressed and half ashamed at how easily I can get tricked into buying a new product.  The almost surefire method is the old standby – the holiday re-theme.  I will often get conned into buying products I know I don’t even like, simply because the back of my mind is telling me, “Yeah, but now it has Spooky Halloween Spice!”

That lapse in judgment is what caused me to buy Milky Way’s new Halloween offering: Milky Way Caramel Apple.

I assumed this review would be rather tokenistic, based on the simple arithmetic of I don’t like Milky Ways + I don’t like apple-flavored candy.  And, yet, here I am: the proud owner of a giant bag of candy I’m predisposed to dislike.

Mars, the parent company who makes Milky Ways, was smart with the packaging.  Technically, it’s an “Autumn” product, not a Halloween product.  But if I have to start adding more times of year that food can be themed for, I will get thrown out of whack.  So for my purposes, this a Halloween-themed candy. 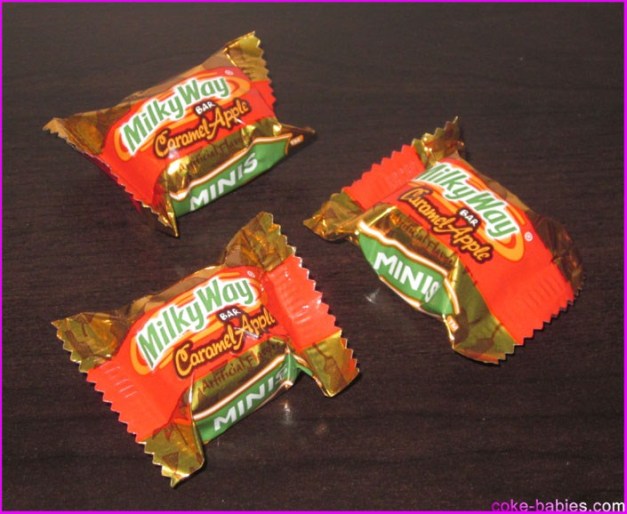 The individual wrappers look similar to the ones I’m already familiar with, as I look at them and leave them in the candy dish in favor of something better.

The nougat color looks much lighter than normal, maybe due to it being apple-flavored.  I can’t be sure without actually comparing them to a normal Milky Way, and that amount of research seems exhausting, so I’m not going to do that.

Surprisingly, the flavor is quite good.  My apple-flavored candy hatred is almost exclusively aimed at “sour” apple, so maybe normal apple is a flavor I’d be willing to give a shot to more often.

The apple flavor has the apple (surprising, I know), but also some of the fall spices you associate with apple pie or cider.  While it is obviously sweet, I was expecting a much more cloying sweetness, which I was happy to find was not there.

Despite the Milky Way Caramel Apple being much better than anticipated, they seem like one of those “unique” flavored candies you can only have a few of at a time.  Of course, some might say you should only have a few pieces of candy at a time anyway, but that’s foolish talk.

I would advise Mars to make more themed Milky Ways, for whatever holiday or season they feel like using, or even inventing.  The themed versions are clearly better than the standard ones, so we might as well get as many different themes as we can.