As I mentioned yesterday in my review of Avengers Candy Sticks, Marvel apparently doesn’t mind slipping the occasional piece of crap onto an unsuspecting public.

Unfortunately, I found out yesterday that this epidemic is more dire than previously thought! 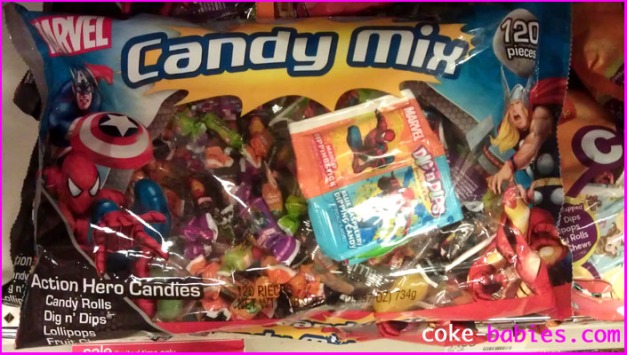 Captain America, Thor, and Iron Man already are guilty of forcing candy sticks upon innocent children.  But now they have enlisted the help your friendly neighborhood Spider-Man.  I know Peter Parker constantly is stretched for money, but have things become this bad for him?

Full disclosure: I didn’t even buy this.  All of my disappointment comes from assumptions, which in fairness are all but guaranteed.  This mix looks like one of those dirt cheap mixes you buy at Party City in order to fill a piñata.

I will give them a little credit, for going with a bizarre flavor choice for their Fun-Dip ripoff – mango.  And the fake Fun-Dip (“Dig n’ Dips”) is the best candy of the lot, if only because it seems slightly less cheap than the other varieties.

All of the other candy formats are the candies you get on Halloween that sit around, uneaten.  Eventually you either eat them because you have nothing left, or you throw them out because you are depressed that this is what your candy supply has come to.  After eating a metric ton of Kit-Kats and Reese’s products, being stuck with a bunch of Dum Dums and other hard candy is a hard pill to swallow.

However, an exception is made for those strawberry hard candies that come in a wrapper that looks like a strawberry.  Those are awesome.

Besides Fake Fun Dip, you get Candy Rolls, lollipops, and fruit chews.  The lollipops don’t even appear to have a Marvel character on them – they’re just plain lollipops.  That is simply offensive.

We need to step up and rid the world of super villains, once and for all.  Because clearly the Marvel heroes are too busy to get involved with their merchandizing deals, and letting their shady agents sell their likeness for whatever they want.

In fairness, Marvel isn’t alone in this assortment of junk.  As you can see next to the Marvel mix, Disney has their own assortment of the same candy.  Getting Disney Princesses and Cars characters involved is simply unfair.  You cover both girls and boys, with characters than they are hypnotized into being unable to say no to.

Disney’s candy mix is almost worse.  Disney has the buying power to walk into any major candy company and say “You’re going to put out a Halloween assortment of Snickers with Lightning McQueen on the wrapper.”  Although that scenario would only work if they went into the offices of the company that makes Snickers.  Them saying that to Hershey probably wouldn’t help too much.

I blame Marvel slightly less for this, since Disney bought Marvel out, and they are the ones who probably decided to make this cheapo mix.  It’s just a shame.  Disney has the money to put out better candy than this.  Disney just bought Star Wars for over $4 billion dollars.  If anyone has ever thought they were rich, a quick reality check would be to have the following conversation with yourself:

“No, not the Blu-rays, or toys, or even overpriced Master Replica masks.  I mean STAR WARS.  Can you own the rights to all of the Star Wars movies?”

So please, Disney – you’re better than this.  And we better not see a Star Wars Candy Mix on the shelves for Halloween 2013.  You should, however, bring back those big bags of little Darth Vader helmets filled with candy.  Those were awesome. 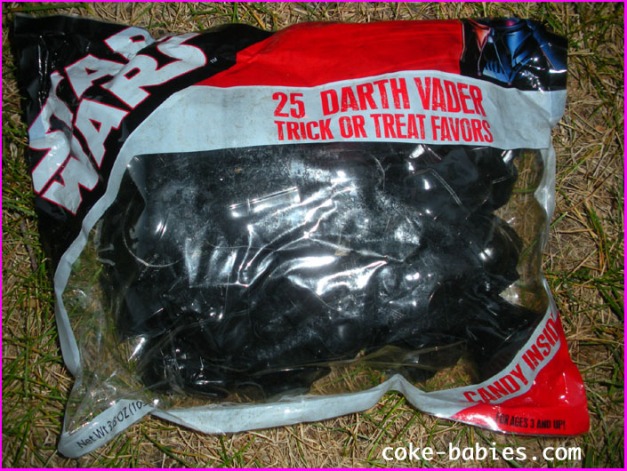