How Popsicle Keeps Screwing Up

With summer approaching, it is time to focus on one of summer’s best friends – the Popsicle.  Or, for this article’s purpose, Popsicle the company.  There is one significant point that needs to be addressed.  This point is that Popsicle is screwing everything up.

Originally, I had planned on reviewing their new yogurt line of pops.  This was almost a year ago.  I couldn’t even muster the energy, it was just so bad.  Not bad in a way that’s interesting to write about, something that really gets the vitriol flowing.  It was just bad in an “ugh, that’s enough” kind of way.

It’s berry, watermelon, and vanilla flavored – how does that get screwed up?  But it does, and I would probably be fine with that, if it didn’t seem like this line got an extreme push from Popsicle.  These were in all the side freezers – the ones you can see from the main aisles without actually going into the freezer aisle.  Then, once in the freezer aisle, they often had their own little section of the freezer where they were prominently displayed.

Instead of promoting this line of dreck, Popsicle should be putting their time, energy, and money into promoting their products that are actually very good.  Popsicle has a lot of great offerings – regular Popsicles, Airhead Popsicles, Firecrackers, lots of stuff.  But some of their best stuff is either being hidden away, discontinued, or just screwed up.

Making the yogurt line more insulting is the fact that on the back of every box is a picture of a Cyclone. 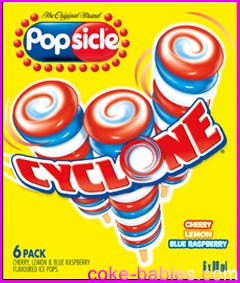 Cyclones are amazing.  They are fantastic, and are being promoted on the back of every box of Popsicles, so why are they not in stores?  I’m not even talking about my local supermarket.  They’re not in any of the stores I’ve checked, which were in multiple states!

I guess I get if they are a limited distribution, but if that is the case, why waste valuable box space with a picture of an item not in full distribution?

Popsicle Improvement Step 1: Get Cyclones in all stores.

Speaking of awesome Popsicle products, one of the best things they ever made is no longer produced: Lick-A-Colors.

I’m not talking about those giant ones from the ice cream man.  Their proportions were all wrong.  Besides, I think now they only make the “sour” version, which is blech.

Their Jolly Rancher pop looks like it was inspired by Lick-A-Color, with it’s different layers.  Except they’re not very good, and one of the flavors is green apple.  So, no.

Popsicle Improvement Step 2 (and this is probably the most important step): Bring Lick-A-Colors back in the multi-pack box.

One thing I’ve never understood was how you were supposed to save the gumballs for last when you got a character bar from the ice cream man.  Yeah, Tweety has two gumballs eyes, but what do I do with them – put them in my pocket?  I usually tried eating around them until the end, but even then there was enough bar left where you had to store one of the gumballs in your cheek like a squirrel.

Or I would sometimes just eat them.  They were barely gum, more of a Razzles mutation. 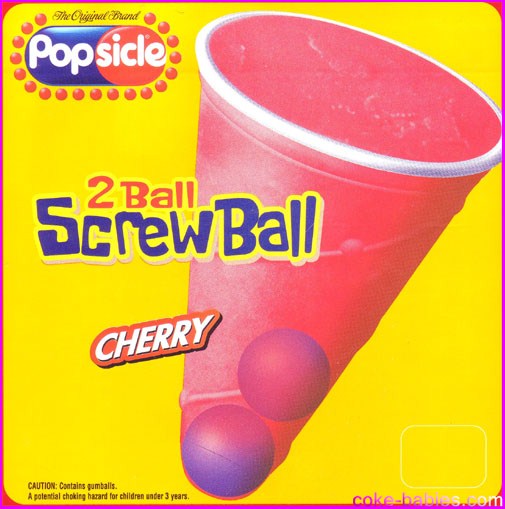 Point being, gum that comes with the sherbet things from the ice cream man is usually bad.  So why did they take the Screwball, which is awesome, remove the good stuff (the sherbet) and add more of the crap (the gum, in case you weren’t paying attention)?

Popsicle Improvement Step 3: Get rid of the extraneous gumball in Screwballs.

For kids of the 80s, probably the two most iconic ice cream man treats were Fat Frog and Bubble O’Bill (which is NOT Buffalo Bill).  Bubble O’Bill has somehow managed to survive, and is actually quite popular in Australia.

For a long time, it seemed like Fat Frog was to be left in the past, an ice cream bar to be looked back on with fond nostalgic memories.  Unfortunately, Popsicle exhumed the frog’s corpse, and continues to desecrate its body to this very day.

A Fat Frog bar was an ice cream bar with M&M eyes, and it was awesome.  Now, it looks like this:

Oh, no M&M eyes anymore – that stinks.  But at least it’s the good old reliable ice cream flavor we used to know and love, right?

If they released an apple melon sherbet bar called Adam Apple or something, that would be perfectly fine.  But to not only bring back the beloved Frog, but also sully it with a disastrous flavor?  Heresy.

Popsicle Improvement Step 4: Kill off Fat Frog before his reputation gets further tarnished.

I actually just now went to the Popsicle site, and can not find the Fat Frog bar anywhere.  So it’s possible that Popsicle already knows they made a grievous error, and are doing their best to cover up their mistake.  That, or it just sold terrible and was discontinued.  Which isn’t surprising, since it’s apple flavored.  But I’m going to give Popsicle the benefit of the doubt on this one.

2 comments on “How Popsicle Keeps Screwing Up”