Eager to shed their reputation as a boring, healthy cereal, Fruity Pebbles decided to take the next logical step – add candy.

The description of Poppin’ Pebbles makes it sound like Fruity Pebbles mixed with Pop Rocks.  This either sounds amazing, or horrifying.  Or both, I guess.

The “Fizzes in your mouth” description puts me off, a bit.  It immediately reminds me of Lotsa Fizz, that candy you’d get from the ice cream man.  It was a strip of five or six hard candies, filled with “fizz”.  I’m not sure what the effect was supposed to be – it wasn’t like Pop Rocks, it was almost like a very weak Alka-Seltzer going off in your mouth.  It tasted like that, too.

What is immediately noticeable upon opening the box is that the cereal smells terrible.  I thought the “poppin'” pieces would be “Burstin’ Berry” flavored, and the cereal would be its normal, Fruity self.  Instead, the Pebbles pieces themselves are berry flavored, as well.  And it smells awful – like children’s medicine.  And not the good, chewable grape or orange baby aspirin, either.  Like the medicine they try just hard enough to make appealing to kids, but you still can’t avoid the fact that it’s medicine. 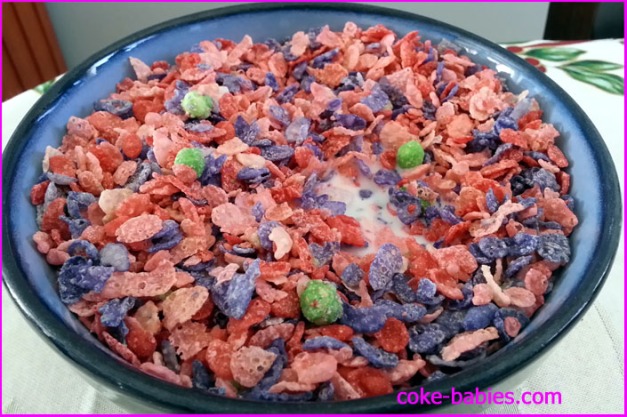 Pouring the milk in, I was disappointed with the silence I was greeted with.  Your box brags of all of the “Poppin'” that’s going to be happening, yet your cereal would easily be drowned out by the cacophony of Rice Krispies?  Amateur hour.

The cereal doesn’t taste as bad as it smells, but it doesn’t exactly taste that good, either.  It’s that awkward middle ground where you think, “I can make it through the rest of the box.” – but you’re not thrilled about it.

As for the “Poppin'” aspect, it’s interesting.  It’s not overly distracting, but it’s definitely noticeable.  I am not disappointed that “Poppin’ Basic 4” doesn’t exist, but for what it is, it’s a nice novelty.  When you bite one of the green “rocks”, you don’t get an immediate burst of Pop Rocks-esque crackling.  It’s a delayed release, so when you get a green rock every few bites, it keeps a steady, mild popping throughout.

Poppin’ Pebbles mostly does what it claims, but the weird flavor puts me off getting another box.  I’d definitely buy Poppin’ Regular Fruity Pebbles – and that emboldened text would be required on the packaging.  But for these Poppin’ Pebbles – buy a box for the novelty, but that will probably be the only one you buy.

I’m sure General Mills’ goal was achieved, with my reaction to their new release.  When I saw Chocolate Toast Crunch, my immediate reaction was, “Oh.”

I initially really liked Peanut Butter Toast Crunch, but got sick of it pretty quickly, and haven’t bought it since.  I’m all for cereal companies trying brand extensions, but for a cereal like Cinnamon Toast Crunch – come on.  It’s one of the best cereals ever.  Let its greatness stand on its own without sullying its good name with brand dilution, and say “Enough!” to these weak Toast Crunch brethren.

So I bought a box of Chocolate Toast Crunch.

There’s nothing much exciting about it to say, so jumping right to the cereal… 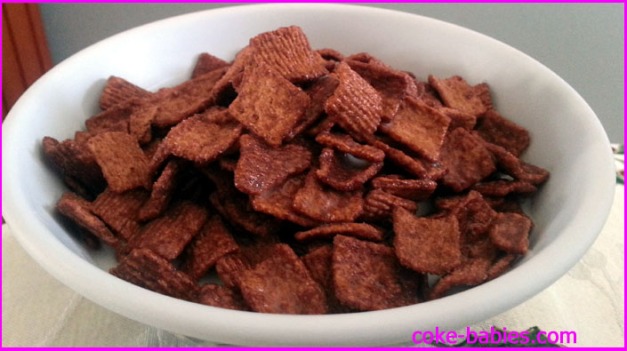 The cereal has a somewhat artificial chocolate flavor – not bad, just not “real”.  Like a strange chocolate milk mix.

Chocolate Toast Crunch actually has a pretty solid chocolate flavor.  But there’s this one note of flavor that doesn’t sit right.  It’s 95% good, then there’s this strange aftertaste that somewhat turns you against what you’ve been eating.  Overall, it’s good.  But that’s really all I can say about it – I probably wouldn’t get it again, if only because there are so many better options for a chocolate cereal.

And it did nothing to turn the milk into chocolate milk.  Ridiculous.