It’s always a little surprising when a new Wonka product comes out.  Despite the fact that they make a ton of awesome candy, it just seems like a company that some big conglomerate forgot to officially shut down, and has been operating without permission for a while.

Unfortunately, their new product is Caramel Apple Laffy Taffy.  Laffy Taffy is usually awesome, provided you don’t get apple or banana.  So when a new apple-themed flavor comes out, my lack of any excitement seems like the appropriate response. 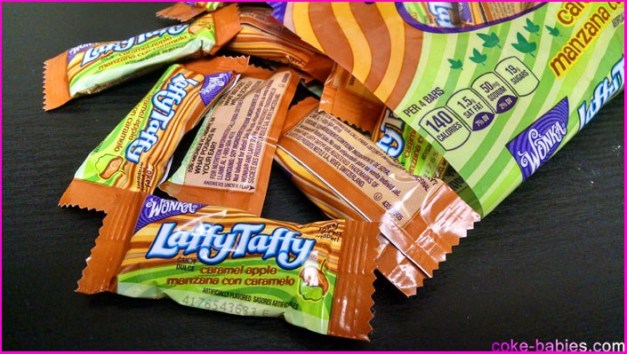 Opening the bag, the first two reactions are: 1) this smells awful and 2) this sure is a lot of Laffy Taffy that I will never eat.  If I don’t wind up liking them (which is likely), I don’t want to give them away for Halloween, as it will greatly lower my house’s reputation for giving away good stuff.  These seem destined for being given away at work, where I usually dispose of unwanted candy under the guise of me being generous.

Surprisingly enough (to me), the flavor itself is not horrifying.  I hate apple, but the flavor balance is nice, where you get a strong caramel flavor at first, and the apple quickly cuts through at the end.  The apple flavor seems slightly softened, so you don’t get that shiver-inducing green apple shockwave.

Also, regarding the jokes – they were especially weak in this bag.  I documented some of my Laffy Taffy joke history, but this bag gave me none of the esoteric classical music humor I’ve gotten in the past.  In fact, about 75% of the jokes were repeated.  So either they have gotten very lazy with their joke assortment, or they just really like Gwendolyn S. from Peoria Illinois’ joke.

Caramel Apple was not my favorite flavor of Laffy Taffy, but I would rank it above banana and apple.  That’s not really a compliment, but it’s also not an insult.  For a flavor I was expecting to hate, I wound up kind of liking it.  And given my prejudice against apple, that’s a decent amount of praise.

So if you like apple as a flavor, I think this would be a definite recommendation.  If you don’t, it’s probably not worth it.