Seeing a “Minions” cereal on the shelf just made me think, “Wow, it took that long?”  Timing it with the upcoming movie makes sense, but since the characters have blown up so big and long since escaped being tied with the Despicable Me license, it seemed like Universal would have wanted to milk that cash cow a while back.

As of now, I like the Minions.  They’re harmless, funny, and the humor harkens back to old slapstick more than modern Dreamworks humor.  Shrek’s humor always had that not-subtle coating of cynicism and mean-spiritedness, something that made it age very poorly for me.  But old school slapstick is timeless.

And the fact that these characters literally speak gibberish is fantastic.  I’m actually disappointed the upcoming movie has human characters.  I would have loved to have seen how far they could take a movie with no dialogue, and survived solely on the lunacy of the characters.  Like the first half of Wall-E on amphetamines.

I’m not too thrilled with those Minions memes on Facebook, though.  Those can go away as soon as possible. 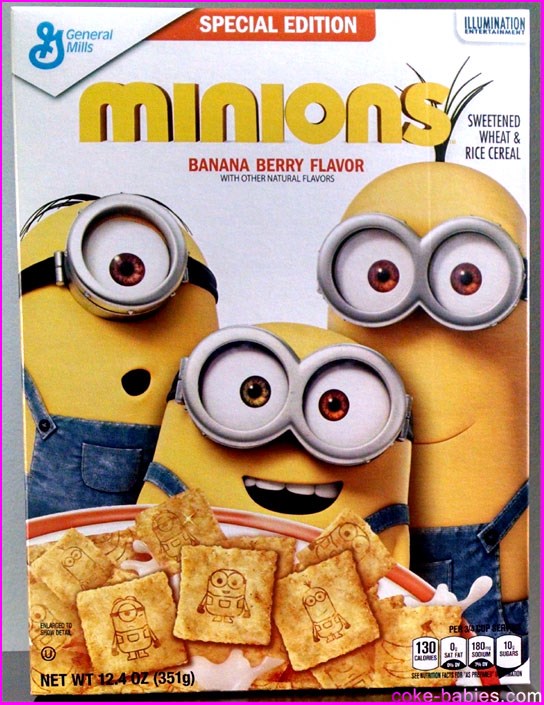 It was surprising that the cereal didn’t involve marshmallows in some capacity.  Though I was grateful for the respite, given the terribleness of the last two marshmallow-containing movie tie-in cereals I’d had.

Instead, Minions cereal goes with a square cereal piece with Minion designs on them.  Whether the cereal pieces would be more Golden Graham or Cinnamon Toast Crunch was yet to be determined, but it looked like CTC was the front runner.

The box design is good enough – it gives you a giant Minion design and shows some of the cereal, so it gets the point across.  Other than that, there’s not too much on the box worth noting.  Oh, wait…

Well, this is discouraging.  The presence of “berry” in the flavor didn’t do much to lift my spirits.  Oh well – on with the show.

Thankfully, upon opening the box, the banana smell was not overwhelming.  It was barely present, surprisingly.  Banana doesn’t tend to be a subtle flavor or scent, so I had a small glimmer of hope.  Just a small one, though – this is still banana we’re talking about.

Speaking of “barely present”, the Minion designs on the cereal are… unimpressive.

I mustered up all the courage I could, and took a bite.  And the flavor is… pretty good?  Wait, what?

This is a cereal based on hyperactive weirdos, with a flavor that tends to punch you in the face with its assertiveness, and the end result is a relatively restrained usage of banana?  Color me surprised. 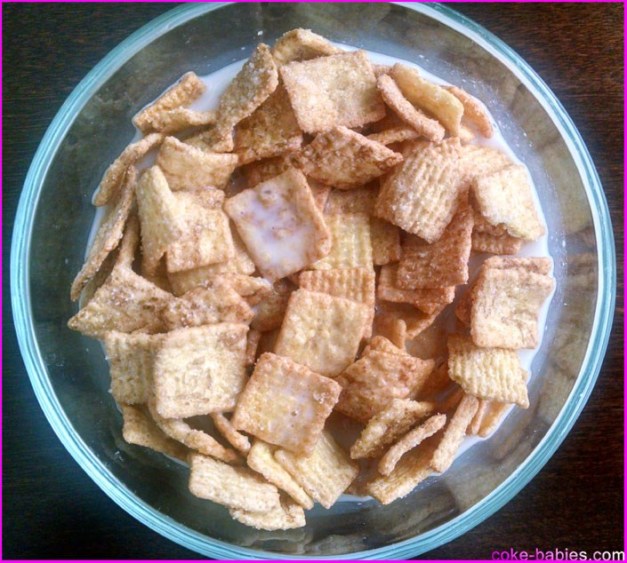 The banana flavor is more akin to banana bread than the “BANANA!” flavor you tend to get in candy, ice cream, and other banana-flavored foods.  The “berry” aspect is there as well, but it is also not a strong flavor.

The end result is Cinnamon Toast Crunch with some back-end flavors of banana bread and some mysterious berry flavor.  Oddly enough, the berry aspect of the taste is the worst part.  It’s not bad, it’s just kind of pointless.

Given my fears, I’m as surprised as anyone that I not only finished the bowl, but actually enjoyed it.  Well, enjoyed it enough.  I’ll probably finish the box, but that’d be it for me.  For a banana-flavored cereal, the fact that it’s as good as it is – shocking, really.