Apparently, looking online to see what product’s discontinuation people are complaining about has become a viable business method.  Or the other side of that, our innate desire to complain online has become rewarded, now numerous times, by a product’s re-release.

We’ve seen this with Surge, French Toast Crunch, probably other stuff I’m too lazy to remember, and now Smorz cereal.

I wasn’t too hyped on the return of Surge or French Toast Crunch, because I was never super into either of them when they originally came out.  I don’t even remember if I ever actually had French Toast Crunch during its original run. 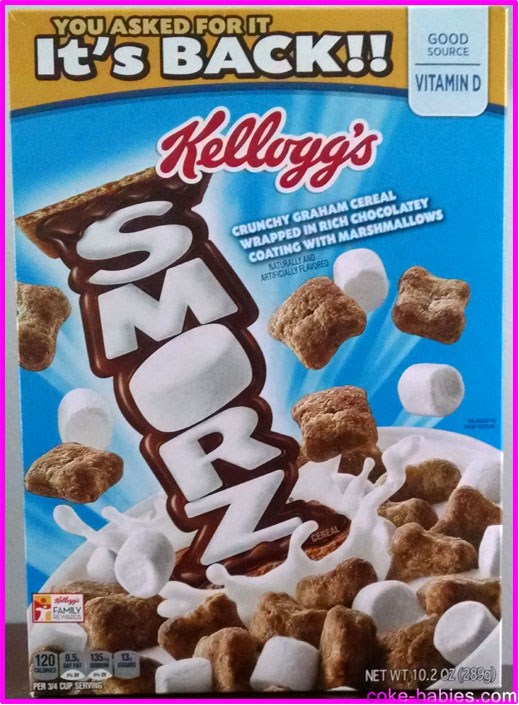 Smorz cereal falls into a different category than Surge or French Toast Crunch, in that I know I never had it, never had an interest in it.  Also, that name is just awful.

Despite the box’s appearance, and that name, the cereal surprisingly did not come out in the 90’s.  It came out in 2003, which was way too late for a cereal to be named “Smorz”.

I know a cereal’s box won’t always indicate exactly how it will look in the bowl, the size of the marshmallow compared to the cereal pieces on the box, versus how they actually compare, borders on criminally deceptive: 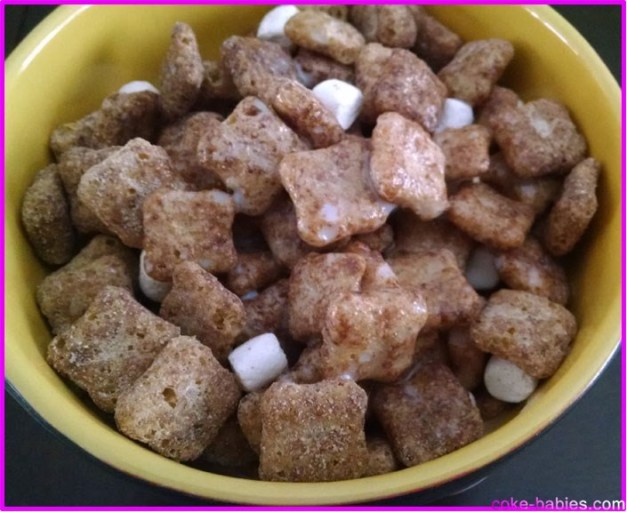 Thankfully, this change is something I prefer, as these are the more “real” cereal marshmallows, of which I am not a fan.  Give me the dry Lucky Charms marshmallows all day, but the weird fake mini-marshmallows are often off putting .

The taste itself is okay.  You get chocolate, graham, and marshmallow – it’s s’mores.  Unfortunately, you get that cheap, crummy Cocoa Puffs-esque cereal chocolate flavor.  The graham flavor is odd – it strikes a balance between “real” graham cracker flavor and the more artificial Golden Grahams flavor.  The flavor compromise just leaves in this awkward, unsatisfying middle ground.

I think this cereal should have stayed dead.  I know lots of people won’t agree, and that’s cool – they got their comeback victory.  I’m just genuinely confused as to how Smorz could have generated the comeback clamoring it did.  It’s not particularly good (being complimentary, there) and given its barely-deceased status, it doesn’t even have nostalgia going for it.