General Mills seems to be fully understanding the power of nostalgia.  After it acquiesced to the internet by re-releasing French Toast Crunch, I assume it sold well because they’re fully on board the Toast Crunch train.

When I saw Apple Cinnamon Toast Crunch, it was sitting next to Blueberry Toast Crunch and Strawberry Toast Crunch.  I’d heard Apple was coming out, but what were these other flavors?  Upon closer inspection, they were just the decidedly mediocre Tiny Toast, rebranded.  General Mills saw the mighty sales power of the Toast Crunch name, and applied it to the “Target’s Cartwheel app has these things at 50% off almost every day” miniature toast line.

I wasn’t particularly excited for Apple Cinnamon Toast Crunch, as apple cinnamon is never a cereal flavor I’m into.  Apple often sucks as a flavor in general, so I just have to be grateful that I have yet to see a “Sour Apple” cereal.

Side Note : Just a friendly reminder to Skittles to sort your life out and bring lime back and get that apple abomination out of the classic mix.

As for the cereal – it’s good.  What saves it is cereal shape.  The “toast” shape and texture works very well here, somehow much better than in Tiny Toast.  Or maybe it’s just that Tiny Toast’s flavor was so off-putting that I didn’t notice the texture.

It’s not a perverse level of apple cinnamon.  It seems to be a happy medium that should work for people that love the flavor and those that aren’t so much a fan.

What I kind of really want now is a toast-shaped cereal, but with the Cinnamon Toast Crunch flavor.  Can we have that please General Mills?  Thanks.

Seeing Cocoa Puffs “Ice Cream Scoops” cereal on the shelf brought an almost overwhelming wave of ambivalence crashing down on me.  I saw it on the shelf and thought, “Oh.”

I hate to disparage a product that’s trying, I guess.  But Cocoa Puffs is easily the weakest of the major chocolate cereals.  I’m pretty sure I haven’t bought a box in about 20 years.  I will occasionally have it in a hotel’s breakfast bar, because it’s a better option than Corn Flakes or granola.

So I wasn’t too excited for this.  The box doesn’t drum up much excitement, either.  The Neapolitan shades are strangely washed out.  Like I got one of the last boxes made on the production line before they refilled the ink. 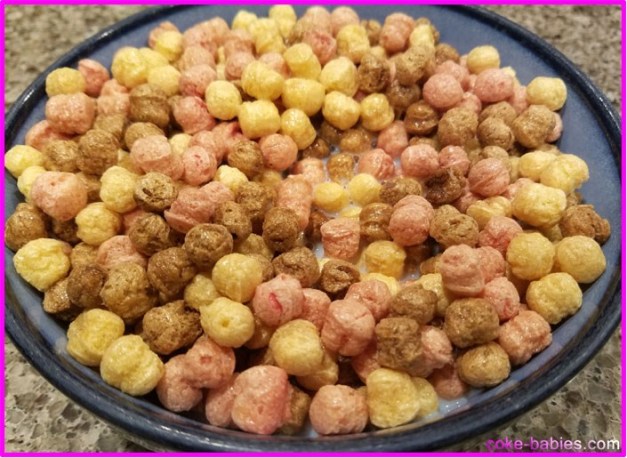 It also seems like they didn’t put enough ink on the cereal pieces themselves.  The colors inspire sadness.  Like if there was an Instagram filter named “blah”, it would look like I applied it to the picture of the cereal.

Also, the cereal is bad.  The only flavor is strawberry, but a very medicinal-flavored strawberry.  Like if one day Yoo-Hoo came out and said, “Oh by the way the Strawberry variety is also now good for when you have a bad cough.”

Good thing I have a “Family Size” box of this.