Since the good Cap’n has yet to release Thanksgiving Crunch, it seems – like the rest of the world – the cereal world is skipping right from Halloween to Christmas.

The first two holiday offerings that the cereal world has put forth (that I’ve seen, anyway) are Christmas cookie-themed variations of existing cereals.

The first, Sugar Cookie Toast Crunch, is a sugar cookie-flavored twist on Cinnamon Toast Crunch.  I’m going to go ahead and assume you didn’t need me to explain that.

First off – the packaging is awesome.  Bright, pale, snowy blues make a great wintery background for the Christmas decorations that make up the bulk of the box.  I also like the cracked-out cereal piece guys.  They are alarmingly excited at the prospect of what appears to be a bowl full of family members about to be eaten.  So maybe they’re on meth, not crack.

Drugged out, cannibalistic cereal pieces would normally be a turnoff, but since they’re wearing cute little elf hats, I’ll let it slide.

And taste-wise, that’s essentially what it is.  Some of it may be placebo effect, but the cereal pieces themselves do seem to have a “sugar cookie” flavor to them.  The coating dials back on the cinnamon, almost entirely, and amps up the surface sugar.  Despite the clear increase in sugar flavor, the cereal itself is no more sweet than any of the other Toast Crunch varieties. 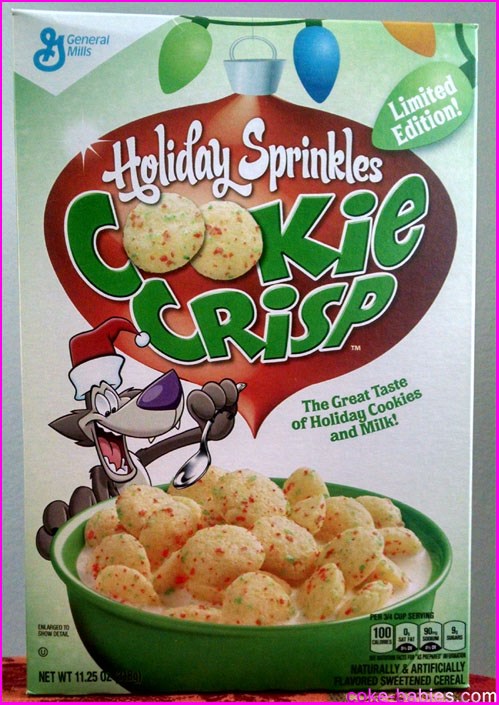 Like Sugar Cookie Toast Crunch, the packaging is well-designed.  I prefer Sugar Cookie’s, simply because of my preference for the blue shades.  But the shades of green, along with a different Christmas decoration on the logo, but keeping the lights to tie the cereals together, all make for a cohesive and good looking box.  Together, the cereals make for a very good pair of Christmas cereals, from a visual standpoint. 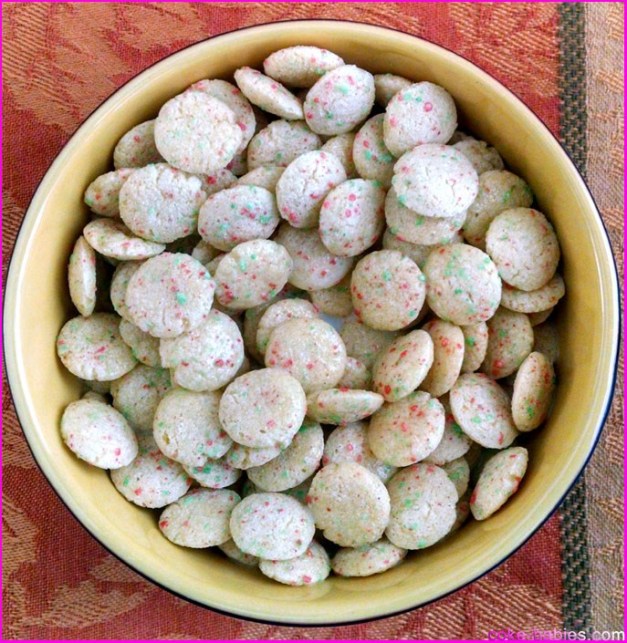 The cereal looks about what you’d expect, though the color saturation on the sprinkles leaves a little to be desired.

Holiday Sprinkles Cookie Crisp is immediately at a disadvantage compared to Sugar Cookie Toast Crunch, because it doesn’t have a clear idea of what kind of cookie it’s supposed to be.

If anything, it seems like they took a cupcake with sprinkles and decided, “That’s good enough, I guess.”  Except “Christmas cupcakes” aren’t really a thing.  But the cereal has more of a flavor of yellow cake than sugar cookies.

This is clearly just a red and green repaint of Sprinkles Cookie Crisp.  Though I’ve never actually had that, so this winds up being a new cereal to me.

So I’m not exactly sure what cookie this is meant to be.  So as a cookie cereal, I can’t really consider this a success.  However, its yellow cake flavor is nice – not overwhelming, just enough to make it sweet but make it easy to eat a whole bowl without getting sick of it.

One strike against Holiday Sprinkles I have to give it compared to regular Cookie Crisp is, oddly enough, something it does better.  One of my favorite parts of Cookie Crisp is when all the little chips wash off the cookies, so when you drink the milk you’ve got hundreds of tiny chips in there, as well.  The Holiday Sprinkles cereal held on to the sprinkles much better, so there wasn’t that much in the milk.

While it’s a questionable “cookie” cereal, Holiday Sprinkles Cookie Crisp is an admirable effort, and a good cereal.

I’m all for holiday themed cereals, so well done to General Mills for introducing two solid cereals (along with two very well done cereal boxes).  Though Sugar Cookie Toast Crunch is the much better of the two.

Next year, bring these back, and maybe introduce another one.  But if they bring these back next year, and include an ornament as a prize inside, these cereals could reach late 80’s / early 90’s Christmas Crunch and Super Golden Crisp levels of Christmas cereal awesomeness.

And “cut out the ornament from the back of the box” does not count, General Mills.  There’s no cutting corners to greatness.