Vacations are weird.  When you’re little, you love them; you go to new places, and your parents buy you all sorts of ridiculous stuff.  Plus you get to dine on only the finest in roadside cuisine, such as Stuckeys’ miniature pecan pies.  Then once you become a jaded teenager, you don’t want to spend any time with your family at home, much less be trapped with them far away from there.  I’ve passed both of those stages, and am now in the midst of having probably the best set of vacation goals.  I’m old enough to be out on my own, yet not mature enough to have any traveling purposes beyond finding cereals that aren’t available where I live and being astounded at the sight of fireworks being sold in supermarkets.

In theory, Florida is the perfect destination for someone like me.  There is an overabundance of complete ridiculousness, depending on where you go.  I think this is found mostly in Miami.  However I am basing that assumption on the fact that the most common building color in Miami is pink, so don’t take my word for it.  As luck (?) would have it, I have a friend who currently resides in Florida.  His area of Florida doesn’t overtly display any of the traits commonly associated with Florida: a population of mostly old people, theme parks, or palm trees.  Actually, I think there were palm trees; I probably just wasn’t paying much attention.  Anyhow, I recently went down there with two other friends, as I am somewhat uncomfortable with being a guest by myself.  Being the only person staying at someone’s house, especially when they live with their family, feels like walking into a store and being the only customer there.  The employees are just kind of mulling about, waiting for you to leave so they can go back to doing nothing, as you feel the need to be the perfect shopper so as not to disappoint them.

With that wonderful bit of background information out of the way, we now progress to the adventure and excitement that is airline travel!  Luckily, our flight was very early in the morning, so we were able to avoid most of the annoyances associated with flying.  The check in counter was our first hurdle.  The airline employee wasn’t too keen on the idea of herding our motley crew right onto the plane.  My friends Josh and Mike at this point already had 5 o’clock shadows, despite it being about 8 AM.  Combining that, their dark hair (one being long and one being a Screech Powers-esque fro,) as well as an extended discussion on bringing a Zippo onto the plane, you’ve got a fairly suspicious and irritated airline employee.  She probably figured I was some stereotypical Caucasian paid to go along with them to alleviate their aura of villainy.  Finally, she took our bags.  One thing worth mentioning is that one of our bags (Josh’s) contained four boxes of granola bars, a bag of cotton candy, and a large package very poorly wrapped in Elmo paper.  Had they searched our bags and found this, I’m sure we would have been kicked off the plane simply to prevent us from getting to the NAMBLA convention.  Thankfully, the rest of the boarding process was pretty painless.

As for the flight itself, there really isn’t much to say about it.  The seats had TV’s, which was nice.  Even nicer would have been if any of the channels had anything even remotely worth watching.  Eventually, we received our large feast, or what they referred to as a “snack.”  I accepted their offering; however I had already come prepared for the flight with a liter of Tang and a box of Fruit Roll Ups. 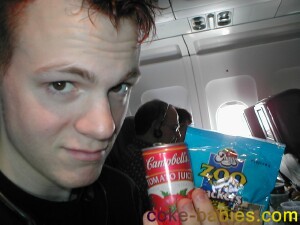 I’m really not going to bother talking about airline food, since that ranks up there with jokes about Dan Quayle and removing mattress tags in terms of being dead and buried topics.  I will mention that Josh was foolish enough to get the blue potato chips, which the package boasted were made from “real blue potatoes.”  I’ll let you deal with figuring that out.

Upon arriving in Florida, I said one of the stupidest things ever uttered, “Wow, it’s hot here.”  I think I just bought into that whole “dry heat” nonsense, and figured it would be an improvement over Long Island’s disgusting mugginess.
Since writing this, I have already been corrected on my previous statement.  Not only does Florida not have a “dry heat,” it is known for the exact opposite.  Oh well, I never claimed to be a member of the “informed” when it came to being familiar with other cultures.  Or states in my own country.  Basically, as soon as I leave my house I am in unfamiliar surroundings.  All I know Florida for is mostly Disney World and alligators.

Nothing particularly worth mentioning happened for the rest of the day, so without any sort of appropriate segue, we move right along to the next day’s destination….

Orlando.  The very name strikes fear into the hearts of those with good taste, or those who attempt to budget their spending money.  It must be tough for Orlando to form any sort of identity besides this.  The city’s entire economic infrastructure is based on theme parks, more specifically on the tourists that visit them.  Trying to make anything respectful out of your city is pretty much impossible when the average person lives there for five days and four nights.  It would be like hatching a plan to form life long friendships by starting a bed and breakfast, and attempting to bond with the guests.

Take this establishment for example.  “World of Denim.”  Now that wouldn’t seem too odd of a name, if it weren’t for the fact that this store was about the same size as most handicapped bathroom stalls.  Yes, there is no shortage of hyperbole, delusions of grandeur, and flat out insanity to be found here.

The first park we were going to visit was Disney World.  When I suggested going there, I was questioned as to why I felt four twenty-somethings going there would be a good idea.  I thought I had good reasoning, but in retrospect…no.  No, I didn’t.  Not every decision we made that day was stupid, mind you, as we decided to fill up on food before going to the park, to save money.  However, not every decision we made that day was good, either, as we decided to eat at McDonald’s.

This wasn’t just any McDonald’s, mind you; it was the biggest McDonald’s in America.  Unfortunately at this point I wasn’t in the habit of taking pictures of random things yet, so I am unable to show you how they felt the need to remind you of this fact by posting signs stating that every four feet.  If the chaos of your average McDonald’s isn’t bad enough, this particular one upped the annoyance ante by having an animatronic Mac Tonight playing piano.  Yes, this restaurant’s apparently limitless budget decided it would be a good idea to spend thousands of dollars resurrecting a spokesperson we hated back when he was at his peak in the mid 80’s.

Outside, there was a statue of Ronald McDonald distracting drivers with his sign, which was showcasing some terrible new product offered inside.  The strange thing was, they decided the best place to put this statue was on the fire escape.  Needless to say, I had to get a picture with him.

Uh, hmmm.  Yeah, that’s not the most masculine looking picture ever taken of me.  I seem a little bit too comfortable being caressed by the caring arm of a clown.  Adam and I better take another picture, so I can look more normal in that one.

Oh come on, what the hell am I doing???  Why can’t I just be standing there normally?  Adam has it down pat, yet I am unable to avoid looking like a fourteen year old girl on her way to a rave.  I bet Adam is thrilled to be seen with me; the people passing by on the street probably thought he was my sugar daddy or something.  Bah.

Besides the dangerous fire escape placement, one other puzzling aspect of Ronald is, why is he posing like old-school Hulk Hogan?  He’s even got the yellow and red look matched.  Scary.

After we dined, it was on to the Magic Kingdom.