I’m sure most of you are thinking, “hmm, it’s been a while since you wrote about Disney.”  Don’t worry, I promise I’ll get off the subject after this, although I feel this article can be wisely used as a Public Service Announcement.  Disney’s prices have gotten somewhat ridiculous, where admission, some food, and some memorabilia will run you well over $100.

The only problem is, Disney is a staple in our lives, especially the parks.  Any parent who doesn’t bring their child to a Disney park at least once needs to be electrocuted.  Therein lies the problem.  How can a child get a good Disney experience, without making the family go on welfare?  Luckily, there is a possible alternative.

How much would you be willing to pay for a grand Disney adventure, where it never rains, the crowds are sparse, and admission is free?  Or around $3.00 on eBay, if you’re strict with rules and laws and such.  Such a way does exist.

That’s right, in the privacy of your own home, you can relive all the times you threw lit candles in the Haunted Mansion, and drowned while driving the race cars.

The obvious question arises, this can’t be as good as actually going to an amusement park, can it?  The answer, my friends, is up to you.  Well, normally it would be, but for this exercise the answer is, in fact, up to me.

The game is broken up into a bunch of main parts: five rides, a bunch of stupid questions, and some other random stuff.  Since we are already well categorized, we move into…

I wasn’t actually paying much attention to the plot itself.  It revolves around finding six keys, which are strewn about the park for reasons unknown.  Or possibly known, just not to me.  Anyways, you need to retrieve the keys, so Mickey can open the Castle and start the parade.  This I don’t understand.  Why does he need to get in the Castle to start the parade?  Is that where Mickey keeps the other characters locked up in the downtime?  Is that… hmm, I can’t even think of any other possibilities.  Hey, Mickey is a jerk, everyone knows it.  Even this kid thinks he’s a psycho, he’s worried about the supreme beat down he’s in store for if he lets a little info slip out.

So you need to find these keys, because for some reason the Castle has six locks.  Once the Castle is opened, the parade can begin; and of course that’s worth risking your life over by going on dangerous missions in order to retrieve the keys. 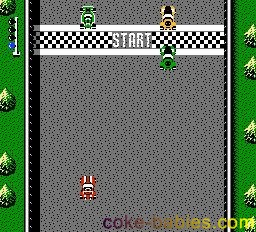 The first mission, should you choose to accept it, is to rocket 7 MPH over deadly terrain.  You must defeat the other racers in Autopia, in order to get one of the keys back from Panhandle Pete.  This is just about as easily done as said, as the competition isn’t too swift.  I don’t think it’s actually possible to lose the race.  The only way to fail is to fall into the water, or lava, or grass.  Of course the race will also randomly end for no reason while you drive along.

“Adventures in the Magic Kingdom” vs. Disney World

For this, Disney World takes the prize.  In real life, you go painfully slow because of safety reasons.  There is no reason to actually replicate that in the game itself.  Plus, in real life there is no ramp jumping over lava.  I’m not a big fan of that. 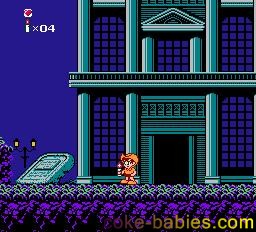 The Haunted Mansion is a tougher decision.  I love the ride, and have no idea why.  So going in I might be a bit biased, but will try and keep it to a minimum.  The game jumps to a quick lead, when we examine the wait for the line.  In Disney World, you can expect to wait anywhere from 20 minutes to an hour to get into the house.  In the game, you simply stroll right in.  The game continues its lead due to the fact that you can throw lit candles in the house.  I can’t even begin to imagine what would happen to you if you tried that in real life.  I’d assume a minimum of about 40 hours in the Tigger costume.

Both the game and real life have the threat of murdering you right from the get go, making you ghost number 1,000.

The final nail in the coffin was that during my adventure in the mansion, not once was I stopped by “playful spirits” who had broken the ride.  Any playful spirit who crossed my path got a candle right in the jaw.  A complete shutout for “Adventures.”

The next mission is again lopsided, only this time in favor of Disney World.  In Big Thunder Mountain, you need to ride the train to a specific spot at the end of the track.  Problem one, there are boulders coming at you.  Problem two, there are bars blocking your path.  Problem three, there is NO WAY of knowing where you’re going, and where you will wind up.  Even if you make it to the end without dying, if you didn’t wind up in the right spot, you still lose a life.  ARGH.  No wonder I have gone through about eighty video game controllers in my life.  Because of stupid crap like this, which forces me to smash my controller into the radiator. 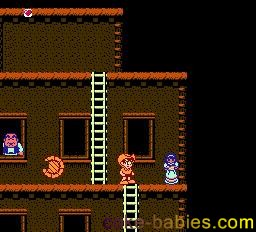 The park pulls even further into the lead with the next mission, Pirates of the Caribbean.  This is saying a lot, since I was highly disappointed by the ride itself.  The ride had a lot more going for it than the game.  First of all, it’s in a boat, on a track, in water.  I love that.

Secondly, in the real ride, no one is throwing barrels at me while I rescue stupid tourists.

I don’t understand why Disney World’s security isn’t handling the hostage negotiations.  It seems to me that sending a little boy in would be something of a last resort. 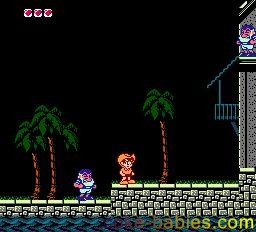 For some reason, the designers of the game decided to make half the pirates look like one of the Seven Dwarfs.  I don’t know which one, but I think Grumpy is my best guess.  Maybe this is his brother, Pissed Off.

The one advantage the game has is fire.  Disney World’s ride has flapping red curtains used to represent a city on fire.  In the game, the entire town seems to be completely ablaze.  Even “The Mercad,” whatever that is, is all lit up.

Unfortunately, it’s too little, too late.

The final ride is Space Mountain.  Again, the game fails here.  Unfortunately, there’s not much of a chance for it, since the ride is splendid.  The mission involves rapid button pressing, where you either have to go in an indicated direction, or shoot something in your way.  I hate this mission.  When I’m playing NES at 6 AM and half asleep, I don’t want to be following hundreds of arrow indicators.  I also don’t want to have to stop pressing the arrows in order to blow up an Imperial Star Destroyer.  Bleh.

The final mission is to go around, pestering children.  This isn’t nearly as fun as it sounds.  These brats know how to find the last key, and are forcing you to answer trivia questions in order to get it.  Some of the questions are easy, however then they throw things like this at you.  After playing this game you will have achieved your goal of knowing that the person who played the younger Hardy Boy was Kevin Corcoran.  Or Tommy Kirk, I forget, and I don’t care.

Eventually we learn that this stupid dog has the key.  Come on, don’t give me that crap about the dog being “around here.”  He’s RIGHT THERE.  Next to you!  Give me that damn key, now!  I’m wearing a cowboy hat and in an awful hurry, so I don’t have time for you or your womanly subterfuge.

I don’t have to put up with this crap at Disney World.  No one talks to me there, and no one asks me lame trivia.

Things are looking very grim for the game, however it is the miscellaneous department where it really stands out.  First off, the weather.  Disney World = rain.  RAIN.  In the game, it is beautiful out, the sun is shining.  Lovely.

Disney World names its stands things like Scuttle’s Landing, who knows what they sell there, I don’t have time for this aggravation.  “El Pirata y el Perico Restaurante.”  What?  What are you selling?  I don’t speak Spanish, my poor knowledge leads me to believe you sell pirates and ‘pericos’ to eat.  WHAT ARE PERICOS?  I don’t want to go to a restaurant where I can’t read the name of the establishment itself.  How do I know what I’m ordering?  I could be getting a plate full of unruly tourists for all I know.

“Adventures” makes it much simpler.  Barber shop, Red Cross, books, candy canes, and clocks.  Granted, I don’t know why any of those things are offered here, but at least I know what they are.

Finally, the crowds.  Disney World has way too many people there.  I don’t want any of them anywhere near me, all of the mothers smelling of suntan lotion and the fathers of bourbon.

In the game, the only people in the park are the question asking children, and as soon as I answer their quizzes, they leave.  Total freedom.

So the game pulled out some wins at the end and tied up the score, 7-7.  Unfortunately, the nail in the coffin is the ending.  At the end of your day at Disney World, you can get Taco Bell, go to your hotel, and watch Spectravision.  Total victory.  The game’s ending?  Not even close.  No.  No, just get away from me with your crotch – thrusting antics. 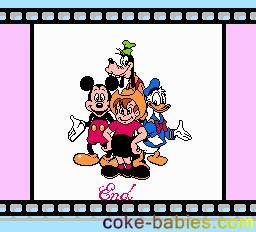 The one aspect I couldn’t decide on was this.  The game calls me by name, which at first was rather comforting.  Disney World never takes the time to personally address me.  However, I don’t think I actually would want this.  If the high-schooler wearing the Baloo costume called me by my name, I think I would be anything but comfortable.

So I guess I was wrong.  This game isn’t good, and isn’t a replacement for Disney World.  The mouse-eared monolith continues to rule childhood with an iron fist, a grip which won’t soon be broken.