I hate to start this review off on an obnoxious note, but I have to get my bragging out of the way.  I am in the soda section of 7-11… a lot.  Sorry, it just had to be said; I couldn’t contain myself.

I’ll do the Terminator scan of the soda section, seeing if anything new catches my eye, then make my purchase out of the standard few I usually get.  Today, when doing my field research, something new popped up.

Excitement washed over me as I realized something different was stocked in with the rest of the Mountain Dews, right next to those giant cans.  Who buys those cans?  It’s a similar size to the bottles, but with the added inconvenience of not being able to re-seal it.  I know there can be variations from bottle to can, especially with carbonation (bottled Mountain Dew always seems little more syrup-y than canned), but by the end of a bottle or giant can of Mountain Dew, it’s going to be flat regardless.

Anyway…  nestled in with the approximately 47 rows of neon green Dew (with the occasional white and red varieties) was a much more subdued can.  My first thought was that they ran out of room for beers, and had to use one of the Dew slots.  Upon closer inspection, I realized it wasn’t beer – it was beer-flavored Mountain Dew!

While the can design is much more subdued than your normal Dew can, they definitely don’t want to be any confusion – this is a form of Mountain Dew.  Between the Dew logo at the top of the can, and the “From the Makers of Mountain Dew” right below it, they want to at least get some attention from Dew drinkers.

Speaking of the can design – it is really nice.  They keep the green, red, and yellow/green color scheme, but turn that into a far more understated look.  One of the first things I thought of when seeing the can was that it looked like a Minnesota Wild jersey.

There’s also a bearded man with a floppy hat on it, in case that would increase your desire to buy the soda.  I have to admit, it helped for me.  Also, since I am known for being as informative as possible (?), Johnson City is the city in Tennessee where Mountain Dew was created.  Knowledge!

In terms of the soda’s flavor profile, it wasn’t something that got me really excited.  I like beer, but I’m definitely not one of those people who desires “beer-flavored” things.  And while I know malt is an ingredient of beer (I did graduate from Beer School in Sea World), when I hear the word “malt”, I either think of malt liquor or malt powder.  Granted, Whoppers flavored Mountain Dew could be interesting, but I don’t think it’s something the nation is ready to accept.

But then again, I’m a loser who gets excited by new flavors of soda, so here we are. 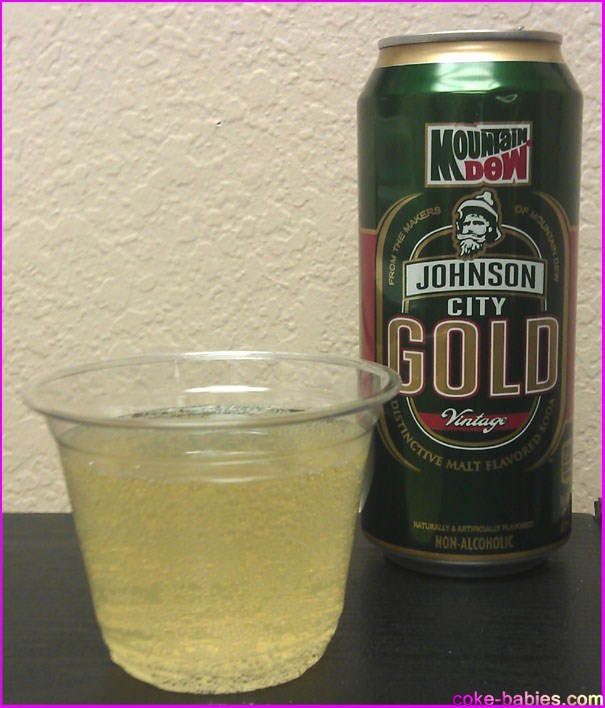 I already mentioned that the can is quite nice looking.  Not as nice looking is the soda’s shade of…. green?  Maybe yellow?  It’s probably best described as a pale yellow with maybe a hint of green.  It would certainly be a stretch to say the color is appealing.  But it’s not actively unappealing, so small favors, I suppose.

Upon opening the can, I found the smell to be unpleasant.  It had subtle notes of “feet”.  It was just a strange combination, with the very strong malt scent, but also with lots of sugary-citrus action happening in the background.  The smell and taste of the soda went through a similar path for me.

The first taste of the soda wasn’t very pleasant, either.  I chalk that up mostly to the fact that I really have not had anything like this before.  I’ve had plenty of those creepy flavored beers, like Sparkz.  But those had alcohol as a major selling point; even if the flavor was suspect, it was still effective.  Johnson City Gold, as it begrudgingly states at the bottom of the can, is non-alcoholic.  So we have a strange malty, beer-y, citrusy flavor and no boozy fun to be had as a result.  What’s the point?

But a funny thing happened while continuing on – I began to really like it.  Once the awkward unfamiliarity began to fade away, what was left was a very interesting flavor profile.  I honestly don’t think I can describe what it tastes like, and actually make it sound appealing.  It doesn’t seem to just taste like Mountain Dew with some malt.  The actual citrus flavor tastes a little different than the standard Dew recipe – a little more laid back of a citrus flavor.

This could be a complete guess (“could be” – it is), but I’m figuring that they dialed back on the Dew flavor so as not to really have to fight it out with the malt.  And if this is what they did, it worked.  It is a well balanced flavor, managing to let you get a very clear malt flavor, and a very clear citrus flavor, without having either playing too much of a starring or a background role.

One other reason this soda had a lot of unfamiliar characteristics to me is that I don’t actually drink a lot of sweetened soda.  I prefer the taste of artificial sweeteners, the way nature intended it.  So the thicker, syrupy aspect of this was something I wasn’t as accustomed to.  But if they mass produced this in a diet version, I’d be all over it on a regular basis.

Not only is the fact that Johnson City Gold is actually very good exciting because we get a good soda out of the deal, the best news of all is a major soda company taking a risk with a very off-center variety.  Granted, Johnson City Gold is currently in the testing phase.  I guess I’m in one of the Chosen Areas.  Hopefully this catches on, and succeeds enough to stick around in the 7-11 world, if not making into a massive rollout.  Long shot but even more hopefullier, it succeeds enough to warrant a diet version.

When I look at a list of all the varieties of Pepsi, I’m always jealous of people who get to try all of these ridiculous varieties.  Most of these don’t sound particularly good, mind you… I just want to have to option of trying them.  There’s plenty of Pepsi varieties that sound amazing – Salty Watermelon  or Cucumber, but plenty that sound scary as hell – actually, wait.  No, most of these sound awesome.

So we get a ridiculous-sounding variety of Dew that manages to succeed as far as flavor goes.  Possibly the bigger question is how it will succeed when it comes to sales.  As popular as beer is, this is still something of a niche-y product.  But well done to Pepsi for taking a risk that paid off.