I know Scooby-Doo is still around in some capacity, whether it is just in reruns of the cartoon, or more sequels to the live action movies that I am just assuming are still being made.

Even though everyone knows who he is, it seems weird that there is a new Scooby-Doo cereal being made.  What is weirder is that it is being made by Kellogg’s, who I would assume could score a better license for a cereal.

One bright spot, literally, for the cereal is the packaging.  In a sea of boxes in the cereal aisle, this one instantly jumps out.  Which isn’t to say the packaging is especially good looking, just very bright green.  It’s actually a pretty unattractive and dull box.

Unfortunately, everything about Scooby-Doo! seems cheap.  Cheap packaging, cheap-looking cereal, and (at least this is a good thing) cheap price.  This is an odd offering from a major cereal company who isn’t trying to get in on the sad “Good Morenings” line.

Lessening my desire to eat it was the description – “Vanilla Flavored Cereal”.  Vanilla is okay for a few things, but as a cereal flavor it sounds creepy.  So there was absolutely nothing that would entice me to buy Scooby-Doo!, except for my strong journalistic integrity.

If you are one of those weird people who eat cereal early in the morning, for breakfast, do not attempt to follow along with the back of the box.  I ate this during normal cereal hours, approximately 2 AM, and found this game confusing as hell.  I didn’t win.  I didn’t even know how to win.

The cereal itself looks awful.  It is shaped like dog bones, but really cheap ones.  They don’t have the structural integrity of those dog bone-shaped candies they sell in the machines by supermarket exits.  The cereal pieces looked like they were pleasant little dog bone shapes, then went through an unfortunate growth spurt.

When taking the first bite, I was extremely confused.  The cereal tasted like nothing.  No taste, save for a very faint “cereal grain” flavor.  Then all of a sudden I got hit with this second wave of vanilla.  Not vanilla like ice cream, or a flavored syrup, more like a marshmallow flavor.  More accurately, and more importantly, it was almost the exact same taste as Rice Krispies Treats Cereal.

It’s like when you get a flavored seltzer water, or even sometimes iced tea, and it tastes like nothing at first, and you go, “Oh yeah, it tastes like orange now.”  Scooby-Doo! is the marshmallow equivalent of mandarin orange seltzer.  Or something like that, anyway.  It even managed to make the milk taste like Treats milk.

I know that being able to say “lightly sweetened” or “less sugar” is a nice thing to be able to put on a box of kid’s cereal.  Even still, this aggressively less-sweet concept is an odd sell for a cartoon cereal.

Despite not caring about the license, and finding the cereal itself rather ugly, I wound up really liking this.  It’s got a decent nutritional breakdown, so you get a sweetened cereal feel without the downside.

Granted, I’d still rather just eat Rice Krispies Treats Cereal, but considering what an uphill battle this cereal had, I was surprised by how enjoyable it is.

Despite the fact that I eat it all the time, I guess I don’t pay attention to the current lineup of Lucky Charms marshmallows.  This explains why, when I saw their limited edition “Green Clovers” version, I thought, “I thought it already had Green Clovers?  It’s in the song!”

Then I compared it to a current box, where the marshmallows are all rainbows, or something.  And even the standard marshmallow lineup doesn’t have clovers anymore – it has hats with clovers on them.  Just bring back the original lineup and stop screwing around, Lucky.  Your cereal is awesome enough without all the gimmicky marshmallows. 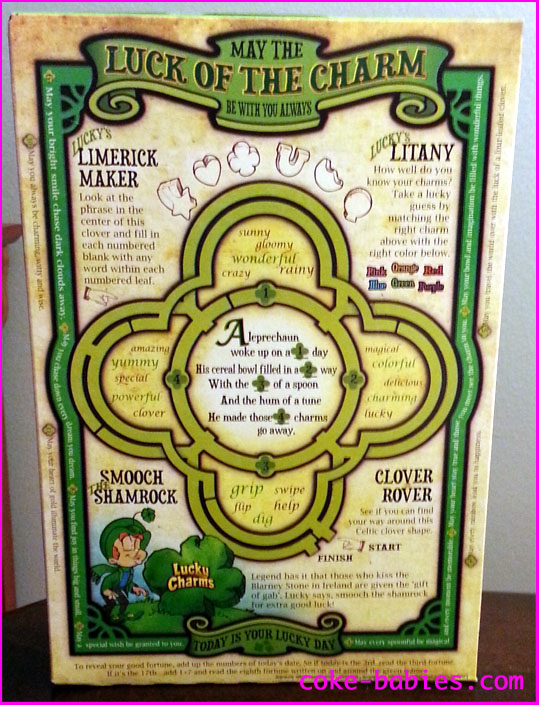 This was one of those rare back of the cereal boxes that simply looked too boring to even bother with. 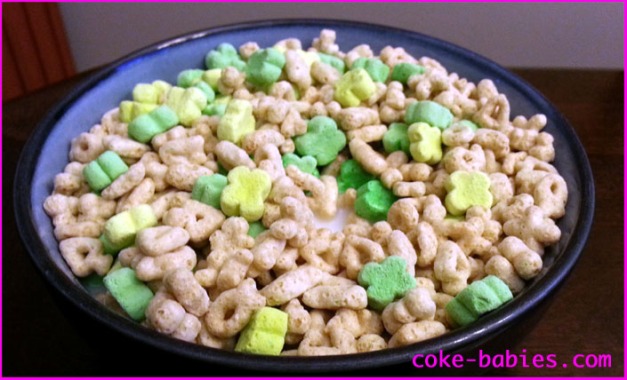 As for the taste – come on, it’s Lucky Charms.  You don’t need a description.  Although I didn’t think the Green Clovers edition tasted any more green than usual.

It did do a nice job dying the milk green, though.